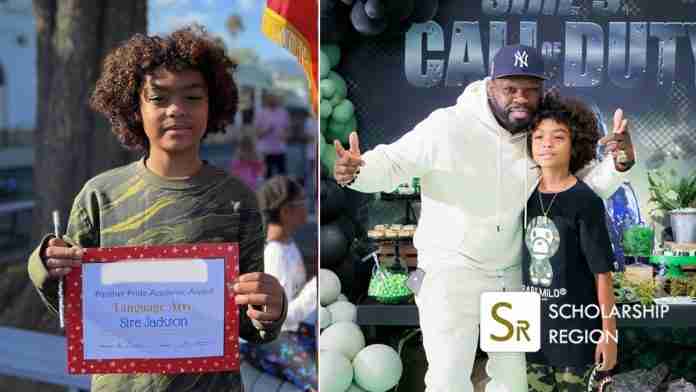 Sire Jackson – the son of top United States rapper, Curtis James Jackson (50 Cent) has won the student of the month award in his High School.

Sire Jackson, 10, was awarded the Panther Pride Academic Award in Language Arts. Celebrating his achievement, his father, 50 Cent posted a picture of his son. “my boy getting student of the month,” he wrote on Twitter.

Sire Jackson is 50 Cent’s third child and has been growing both academically and financially.

In another story, the 27-year-old son of the late King of Pop Michael Jackson, Prince, graduated from Loyola Marymount College in Los Angeles with a Bachelor’s degree in Business Administration.

Prince had attended the prestigious Buckley School in California before proceeding for his university degree at Loyola Marymount College. His cousin, TJ Jackson, tweeted a photo of himself and Prince on his graduation day. He said: “Prince, it’s been a long road but you did it. Keep learning, keep growing and keep giving back! So so proud of you. I love you.”

SR - April 22, 2022 0
The DAAD has announced the application for the 2022 Friedrich Ebert Foundation Scholarship for international students willing to pursue undergraduate or postgraduate courses in...

SR - July 25, 2022 0
The Government of the Czech Republic offers scholarships within the framework of its Foreign Development Assistance in support of the study of foreign nationals from developing...

Speaking about his experience in the university, Prince said he met so many people and learned so much that the experience.

“I wish I could thank everyone that helped me make it to the end but I can’t and unfortunately, they’re not all pictured here,” he wrote alongside graduation pictures with his loved ones, including grandmother Katherine Jackson. Read more about Prince Michael Jackson Jr. in this article.