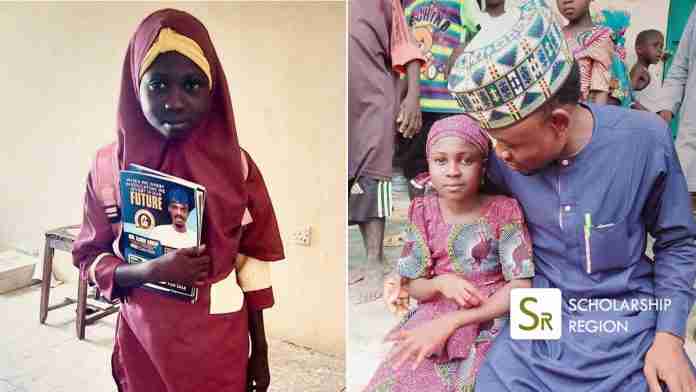 A brilliant 13-year-old Nigerian girl named Saratu Dan-Azumi has won a World Bank scholarship to study from primary school up to her university education after solving some tough mathematics questions.

Saratu who hails from Kano State, Northern Nigeria, was challenged due to the inability of her parent to enrol her on school for proper education. However, after a video of her solving mathematics questions went viral, a generous Nigerian man named Bashir Ahmad became the first person who took it upon himself to sponsor her education.

Bashir Ahmad through his Foundation said he will sponsor her up to her university education. “The Bashir Ahmad Foundation has successfully concluded the enrollment of Saratu Dan-Azumi, a brilliant out-of-school girl, who effortlessly solves arithmetics without being taught, in a school in Gaya LGA.”

“The BAF sponsors her education up to university,” the Foundation wrote on Twitter.

Narrating how they were amazed by the young girl’s mathematical prowess, the Foundation explained that they swung into action to look for her immediately after the video of her solving arithmetics went viral.

“After receiving the video of the young talented girl from different people, I sent a delegation of my foundation to look for her and luckily she was found. We have agreed with her parent and we are going to sponsor her education to University.”

“We have already chosen a school for her and on Monday she will be enrolled in primary school. After that we will continue to look after her study and ensure that we fulfill our promises,” Bashir Ahmad wrote on his official Facebook account.

Studying in the United States, United Kingdom and Canada opens you to a lot of new opportunities. At Scholarship Region, we keep track of Scholarship opportunities around the world that can fund your education abroad so as to inform and remind you whenever they are available.

Bashir Ahmad added that apart from supporting her education, the foundation would enroll her in a Digital Centre where she will acquire knowledge in information and communication technology.

A few days after the Foundation’s sponsorship, the World Bank through an assisted program called Adolescent Girls Initiative for Learning and Empowerment (AGILE) announced that Saratu will also be sponsored through the platform.

Aliyu Yusuf, the project’s communication officer says they will shoulder the educational responsibilities of the young girl.