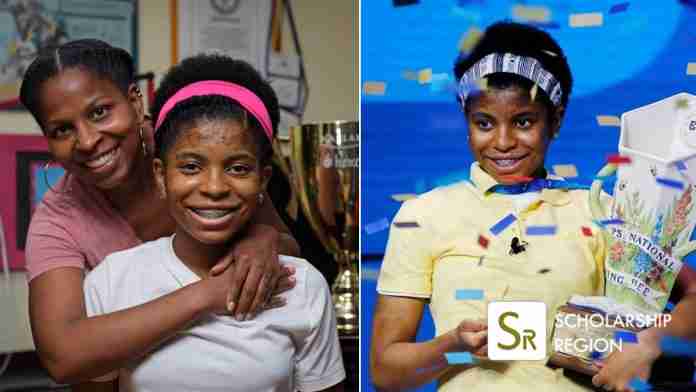 A 14 year old brilliant kid has emerged the first ever African American to win National spelling bee competition and has received scholarships offers from different universities across the country.

The girl by name, Zaila Avant-Garde who is  from Harvey, Louisiana, United state made history after correctly spelling the word “Murraya,” a type of tree, in the final round.

Zaila became champion after beating 208 contestants from 5 countries. She began receiving full-ride scholarships one after another from different prominent universities thereafter.

Louisiana Community and Technical College System posted on its Facebook page, “In celebration of her incredible performance at the National Spelling Bee, LCTCS is proud to offer Zaila Avant-garde a full scholarship to any Louisiana community and technical college. We believe our programs, such as aerospace technology, would be a great fit for you,”

Southern University President Ray L. Belton took to Twitter, “I am pleased to announce that @Southernu_BR is offering #ZailaAvantgarde a full scholarship and “#Zaila Day” at SU, part of the nation’s only #HBCU system. Our student leaders, faculty, and alumni look forward to meeting with you. We welcome you to the #JaguarNation!”

Meanwhile, Zaila, who holds three Guinness World Records for her basketball abilities, has shown an interest in playing college basketball at Harvard University.