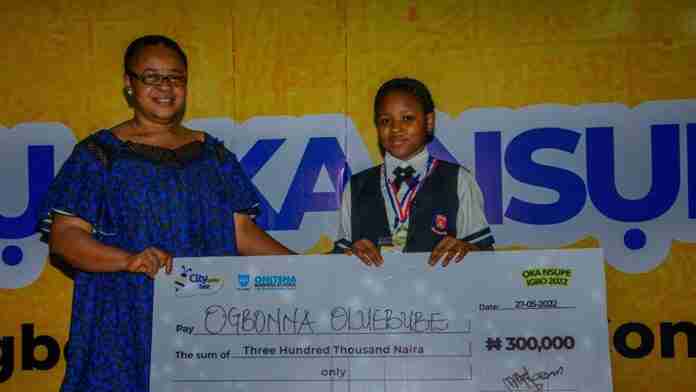 A 14-year-old Nigerian kid, Oluebeube Ogbonna, has been declared the winner of the first native Igbo spelling bee competition after beating 356 other contestant in Anambra state, South-East Nigeria.

The Igbo language is the language of an ethnic group predominantly in the Eastern part of Nigeria. There are several other major ethnic languages in Nigeria including the Hausa language, the Yoruba language and others.

Oluebeube Ogbonna, the winner of the igbo spelling bee competition, is a student of Divine Rays British School, located in Anambra, Nigeria, emerged winner after beating 356 other public and private secondary school students from the Awka, Nnewi and Onitsha educational zones in participation.

Students were assessed on their knowledge of spelling, Igbo syllabication, and punctuation at the event, which was organized by City Speller Bee in partnership with Onitsha Business School.

Mr. Chinedu Aniagboso, The competition’s Project Manager announced at the occasion that it is Nigeria’s first indigenous language spelling bee, with the goal of attracting youths.

“You can see how excited these students are competing in their own language; they not only understand English, they are also proficient in Igbo,” he said.

At Scholarship Region, we keep track of Scholarship opportunities around the world to inform and remind exceptional students of its availability.

Mr. Chinedu hopes to make it a yearly event and called on several bodies to partner with them to foster the growth of students in the native language.

Prof. Ogochukwu Ifeka, an Igbo Literature at the Chukwuemeka Odumegwu Ojukwu University, Nigeria, revealed that the competition had confirmed that efforts to revive Igbo language were yielding fruits.

According to Ifeka, the competition would garner youth interest in native languages and inspire them to pursue jobs in them.