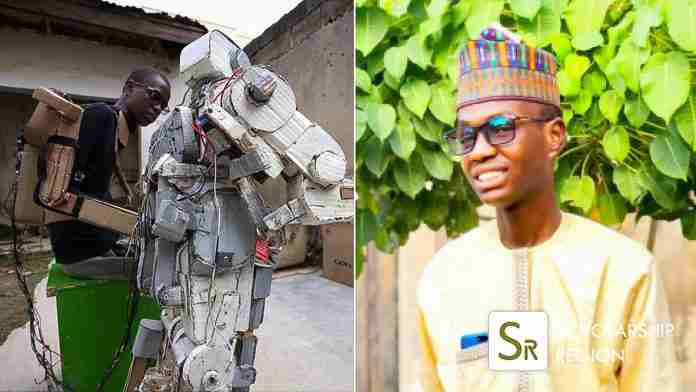 Scholarship Region earlier reported that Isah Auwal who hailed from Kano, Northern Nigeria just concluded his secondary school education with high hope of advancing his knowledge. Shortly after the exceptional story of Isah Auwal gained attention, he was awarded an undergraduate scholarship to Baze University.

The robot in which Isah Auwal invented works with a robotic exoskeleton remote control, a system which controls the robot through the actions of the person operating it. According to him, it took him two years to invent the robot using local materials like DC motors, copper wires, pipes, corrugated cardboard as well as metal, among others.

“I use cartons, pen covers, bottles and those materials that are not hard to get and also the ones that I buy in the market like DC motors,” Isah told BBC.

“Di DC motors are the most expensive of all the materials I use for my design and it costs just N500 for each one of the six used in the robot.”

“After designing the robot, I started working on how to make the robot move instead of it being static, so I began working on the exoskeleton which now makes it move.”

Although Isha Auwal expressed that he wishes to study Robotics Engineering so as to assist Nigeria in tackling security challenges. He has however been awarded a Bachelor’s degree scholarship to study Computer Engineering by the Government of Nigeria.

He noted that his current achievement is just his starting point as he plans to build bigger and better robots. “This is just my starting point, my dream is to build artificial intelligence robot that can control themselves without any remote control,” he said.