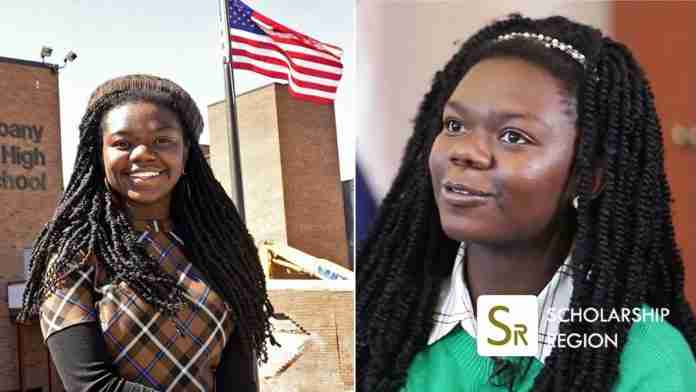 An exceptional 17-year-old girl named Onovu Otitigbe-Dangerfield has broken the 152-year-old record of Albany High School in New York after becoming the first-ever black valedictorian of the school.

Onovu Otitigbe-Dangerfield graduated with an outstanding 4.0 GPA in 2021, beating all her colleagues to clinch the prestigious award.

“It’s overwhelming and really surreal to me, especially hearing from Black girls from other schools that it inspired and motivated them, reaching out to me [saying] ‘it was so nice to see one of us in there,” Onovu told GMA.

She added that she feels honoured not only for breaking her school’s record but also for representing the black community. “It’s not really a win for just me, it’s a win for my community. I feel a responsibility now. I’m not only representing myself. I’m representing a group of people.” she said.

Onovu Otitigbe-Dangerfield ensured her mark was felt during her time in school. She served as the president of multiple school clubs, co-captain of the soccer team and co-editor-in-chief of her digital school newspaper.

Onovu enjoys robotics as her favourite subjects in school are engineering classes (robotics, computer science), which are contributing to her pre-engineering diploma, per GMA.

Studying in the United States opens you to a lot of opportunities. At Scholarship Region, we keep track of Scholarship opportunities around the world so as to inform you whenever they are available.

“As a parent, I’m in awe of her curiosity, her respect, her empathy, her humility and her work ethic. Albany High is the same high school I went to so to know that this is part of history … it’s beyond amazing,” Jessica said.

Onovu would like to pursue a career specializing in robot-assisted procedures in pediatric neurosurgery. She applied to to more than 20 colleges in the United States and was accepted into Harvard, Yale, Brown, Columbia, Cornell, Stanford, Carnegie Mellon, Boston University, Northeastern, Georgia Tech, Johns Hopkins and more.

Onovu how honoured she is to become the school’s first-ever black valedictorian and hopes she is not the last. “I’m really honored to be in this position, but I certainly hope that I am not the last,” she said.