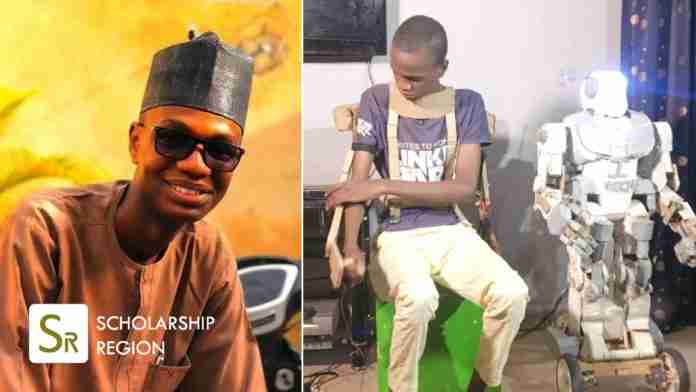 A brilliant 17-year-old Nigerian boy named Isah Auwal Barde has invented a remote-controlled robot using scraps which were considered to be a waste.

Isah Auwal Barde who just concluded his secondary school education has a desire to become a foremost engineer and an artificial intelligence expert. As part of his strive to make his dream come to pass, Auwal began to develop himself by building a robot.

The robot which he invented works with a robotic exoskeleton remote control, a system which controls the robot through the actions of the person operating it. “It took me two years to invent the robot using local materials like DC motors, copper wires, pipes, corrugated cardboard as well as metal, among others, and the robot works with electricity,” Auwal Barde narrated to NAN.

Although Auwal was unable to recall how his interest became so stong in Robotics, his father, Malam Auwal Barde, said he recalled that his son was around 8 years old when he started bringing scraps into the house and building what he termed as “toys” with them.

Studying in the United States and other advanced countries allows you to pursue and achieve your dream. At Scholarship Region, we keep track of Scholarship opportunities around the world that can sponsor your education so as to inform and remind you whenever they are available.

SR - December 1, 2022 0
Obama Foundation Scholars Program will give rising leaders from the United States and around the world who are already making a difference in their...
Load more

Auwal Barde narrated that he was supported by his father and brother to gather and assemble all the components of the robot. “My father and mother sponsored me, and my brother as well motivated me through the journey; whenever I felt like giving up, he encouraged me to be persistent. There were times I got bored doing that work but he inspired me,” he said.

Explaining how he made the about 3-feet tall robot which was demonstrated, Isah said he made use of local items in creating it including motors, cardboard, some LEDs, copper wires, aluminium, tires, nuts, and pipes.

“It cost me almost N30,000 but it’s not everything I bought from the market I attached to the robot. Sometimes, I had bought things in the market and on getting to the house, I would realize it would not be of use to the robot, then I’d divert it to another thing. Some of the motors I bought got spoilt in the process. I have been to Jakara Market (a local market in Nigeria) about five times, and with as much as N3,000 on each occasion,” he explained.

Explaining further, he explained that he got the idea first from movies and the how-to-do it from YouTube videos. “…even though in the movies, you will only be seeing how the robot is moving not the way it’s been made or processed. And also, in movies there are fictional things and at this level, I can’t do that but to the best of my ability I was able to produce this.”

“My next step is to ensure the robot moves around. And I have the dream to make a robot that is artificial intelligence based, what they call humanoids, so it can control itself and help people as well,” he stated.

“Even though my parents have no means to send me abroad to study, I still hope to go there. That is why I want to appeal to the government, individuals, and corporate bodies to come to my aid, so I can make my country proud one day,” Isah appealed.