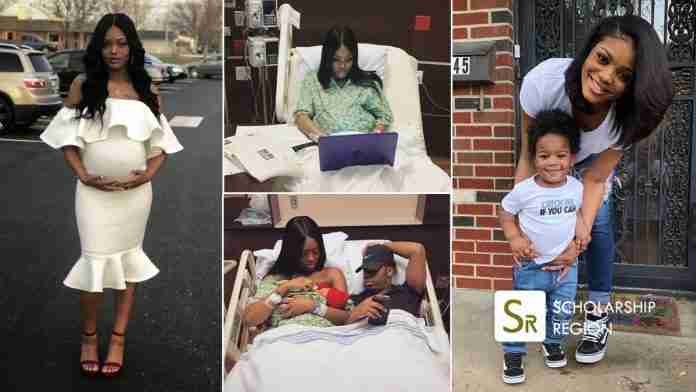 A brilliant 19-year-old pregnant Lady named Nayzia Thomas who wrote her final papers while in the labour expecting to give birth to her son has graduated from the Johnson County Community College, Kansas City, Missouri, United States with a first class.

Nayzia Thomas bagged a first-class Bachelor’s degree in Psychology after scoring a GPA of 3.50. She narrated that she wanted to be done with the semester before the birth of her son, Anthony Johnson, who arrived about 12 hours after she submitted her final.

“It wasn’t due until the end of the week. But my goal was to try to have everything done before. [I thought] before all this gets crazy, let me hurry up and finish this final,” she told Yahoo.

After her experience, she took to her social media page to share with friends the aftermath of her labour room exam session. She shared a before and after photo which she said her mother took while she was in the hospital.

“School is so important to me. I didn’t want [pregnancy] to be in the way. That’s what people expect. You’re a teen mom, you’re a young mother. That’s why my mom took that picture,” she said.

She narrated that she faced serious challenges following her child’s birth but her son’s father was right there to take over whenever she went unconscious. “We had a healthy baby boy. However, I experienced major blood loss & my body went into shock post-delivery. It was very scary, but his father was right there to take over when I went unconscious. We are blessed,” she wrote on Twitter.

Nayzia Thomas said that despite the extra hardships that come with pregnancy, she finished the semester with a 3.5 GPA. “I’m finishing the semester w/ a 3.5 GPA!. It shows I follow through,” she said happily.