2-year-old genius girl scores over 98% in IQ test, becomes one of the smartest persons in the world 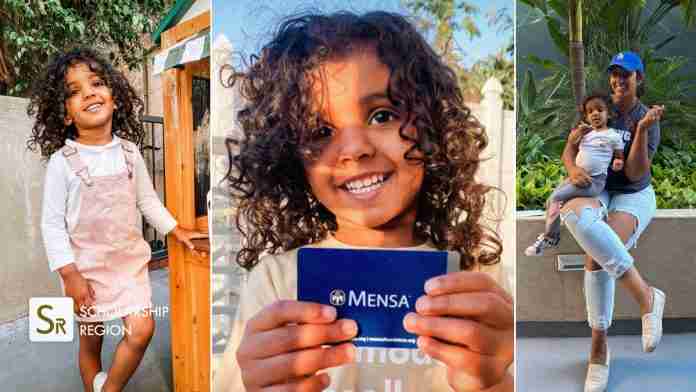 A 2-year-old genius girl named Kashe Quest who hails from California, United States has become the youngest American to join the organization of people with high IQ – Mensa, after scoring over 98% on her entry test.

Kashe, now 4, joined the organization in 2021 with an IQ grade of 146. Mensa is an organization of intelligent persons across the world. To qualify for Mensa membership, applicants must take an approved intelligence test and score at or above the 98th percentile.

Kashe took the test and aced all the questions thrown at her. Sukhjit Athwal, Kashe’s mom told GMA that “By 18 months, she had mastered pretty much the alphabet, numbers, colors, shapes … and then that’s when we started noticing this is pretty advanced for her age.”

Athwal who has a background in education had learning resources readily available around her family’s home, but never pushed Kashe in any particular direction.

“The way we’ve implemented her learning is we’ve never really forced her to sit down and do anything — it was out of her natural curiosity,” she said.

According to her parents, Kashe memorized the 50 states in the United States by shape and location and could name all of the elements on the periodic table by the time she was 2 years old.

“That’s when we were encouraged to explore our options in terms of getting her tested. It’s pretty amazing what she’s doing at this point in time and how fast she’s grasping concepts.” Athwal said.

Although exact details of the Mensa’s IQ test are not made public, Athwal said it was age performative and Kashe was continually tested until the materials either became challenging or she failed to determine her score.

“It was working on receptive memory, cognitive skills and logical reasoning. It wasn’t necessarily, ‘What color is this?’ It was working on more of what her mental capacity was like.” Athwal said.

Speaking about how Kashe is being raised as an extraordinary kid, Athwal narrated that one of the things they’ve learned while raising Kashe is how to communicate and be intentional with their words effectively.

“If we say something incorrectly she’ll be like, ‘No that’s not what you said,’ or, ‘That’s not what it is.’ She’s always correcting us,” Athwal added.

While they encourage Kashe’s development and let her set the pace for what she wants to do, her parents also make sure to keep her balanced. “Being a child is most important,” her mom said. “We want to keep her youthful as long as we can. Socialization and her emotional growth are the most important things for us.”

In another story, an exceptional 11-year-old boy, Ramarni Wilfredm scored higher than Billionaire Bill Gates on an IQ test after scoring 162 to beat Bill Gates’ 160 scores.

Ramarni Wilfredm who is now placed as one of the top 1% smartest people in the United Kingdom started showing signs that he was a genius as a toddler. According to his mother, Anthea, he could read and write by the time he started pre-school, and his favourite book to read was an encyclopedia. Read more about the 11-year-old genius HERE.