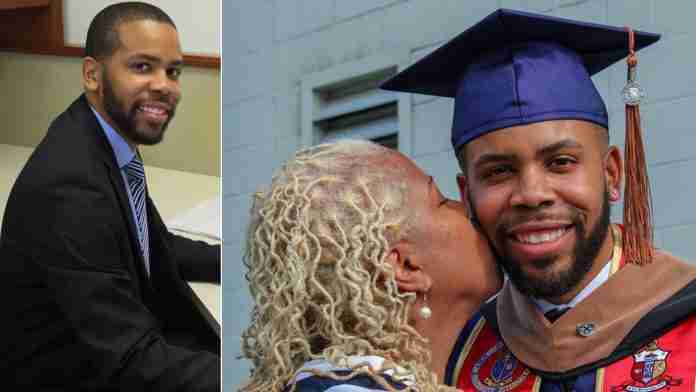 An exceptional 24-year-old American Man named Darrell Landon Kelly has made his family and the entire academic community of the United States of America proud after bagging two Degrees from two different universities on the same day.

Darrell Landon Kelly received a Master’s of Business Admininstration degree (MBA) from Xavier University’s Williams College of Business, Ohio and also recieved a Bachelor of Law degree from the University of Cincinnati College of Law, Ohio, USA on the same day.

A friend of his described his exceptional achievement as scholarly and has done exceedingly more than what was asked of him by becoming a Master’s degree holder and also becoming a Lawyer at the same time.

Lisa Kelly, Kelly’s mother, was extremely proud of what her son has accomplished and how she has supported him and his older sister, Jazmone, who is also a medical student.

Kelly’s family who were specially and highly academicians were also proud of his feat. Although, his mother and aunts all have a Bachelor’s degree, they have never bagged bother Master’s Degree and Bachelor’s Degree at the same time.

Among Kelly’s family, his grandmother was reported to have done something extraordinary by returning to university for a Bachelor’s degree at the age of 73.

Kelly initially heard of the program that will make him earn two degrees at Howard University in Washington DC, but decided to stay back in Ohio and scuttle between Xavier University and University of Cincinnati to achieve his dream and save money.

Studying in universities abroad can be highly expensive and that is why at Scholarship Region, we keep track of Scholarship opportunities around the world to inform and remind you whenever its available.

We share a lot of funding opportunities in our WhatsApp group, join the group using THIS LINK to explore these opportunities.

His mother expressed great pleasure and how proud she is of Kelly’s achievement saying If he’s tall, it’s because he’s standing on tall shoulders.

In Kelly’s reaction to his achievement, he expressed his gratitude to his mom who stood by him and guide him throughout his studies

“It’s time for me to stand and leave the nest… She’s instilled me with all these tools and has guided me for so long,” Kelly said.