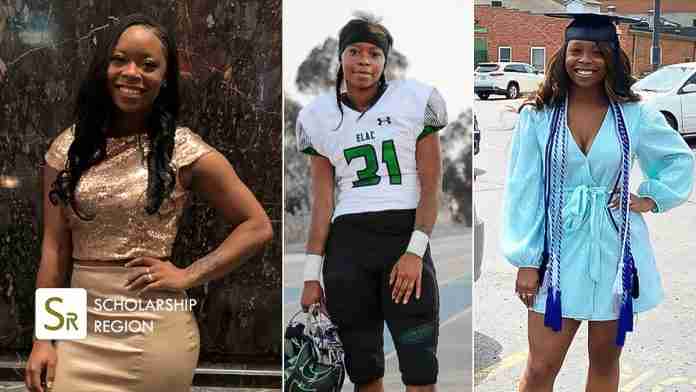 Toni Harris – The brilliant 24-year-old lady who became infamous for being the first-ever woman to attend university on a fully funded football scholarship in the United States has graduated with 4 degrees.

Toni Harris overcame several challenges including gender-based struggles and ovarian cancer which she was diagnosed with at the age of 18. She became the first woman to accept a scholarship to play football at a four-year college, not as a kicker, as other women have done, but as a position player.

She was born in Detroit, Michigan, United States and attended the Redford Union High School in Michigan. She has always been a football fan since she was 4 years old and started practising what she sees on screen until she herself played football during grade school.

Eventually, she entered her high school’s football team with teammates who were not comfortable with her inclusion at first. “It took them some time to warm up to me. But once they did, they were loving, they were supportive – and eventually, everybody else got on board,” Harris said in an interview with Blavity.

She fought on with courage despite people telling her she couldn’t move from high school football to college. Shortly after high school, she entered East Los Angeles College to be able to play free safety with the community college team.

Toni Harris later went on to earn a Bachelor’s Degree in Criminal Justice/Political Science from Central Methodist University, Missouri, United States where she enjoyed a 4-year football scholarshio. Her Bachelor’s degree made it her fourth degree earned at the age of 24 years old.

Celebrating her achievement on LinkedIn, Toni wrote: “God is within her, she will not fail 🙌🏽 24 with four degrees, life is good.”

Studying in the United States opens you to a lot of opportunities and allows you to explore all the available channels. At Scholarship Region, we keep track of Scholarship opportunities around the world to inform and remind you whenever it is available.

She has proceeded to advance her degree having enrolled for a Master’s degree in Criminal Justice and Corrections at the University of Southern California, Los Angeles, United States. She is set to complete her program in December 2022.

She plans on becoming a “homicide detective with a background in forensics” and is on her way to achieving her dream.