25-year-old woman becomes the first-ever blind and deaf person to graduate from US university, shines across the world 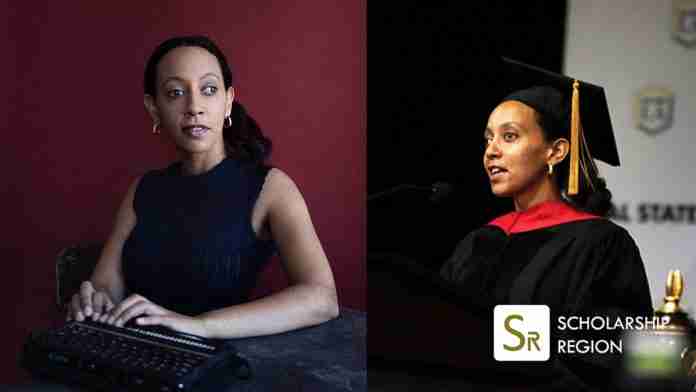 Haben Girma who is now a global icon for achieving her exceptional feat graduated with a Juris Doctor degree (J.D) from the Harvard Law School despite being both blind and deaf in 2013.

Girma lost her vision and hearing as a result of an unknown progressive condition beginning in early childhood, retaining just 1% of her sight. During her early life in the United States, she benefited from civil rights laws including the Americans with Disabilities Act.

She also had accessible technology, such as a digital Braille device to aid her to read. She graduated from Skyline High School in the United States at the age of 17.

According to Habren autobiography where she detailed how she had to learn how to navigate in a world designed for people who see and hear, she defines disability as an opportunity for innovation.

She explained that she learned non-visual techniques for everything from dancing salsa to handling an electric saw. She explained that her hearing translator, Arianne, types what people say and do into a special computer that wirelessly feeds the information to a Braille computer Girma holds.

She runs her fingers over the dots to read, and she responds through speech. “My parents came to the United States seeking opportunities, and they found it’s not geography that creates freedom; it’s people and communities that create freedom,” Girma said.

Speaking about her accomplishments at Harvard Law School, Girma explained she hadn’t planned to apply to Harvard Law, which she thought would be “snobbish,” but an advisor warned her that “a lot of non-disabled law graduates are struggling to get a job” so she should apply to top schools.

She explained further that at the time, Harvard had no clue about how a deafblind person would graduate from the school and that she herself have no clue either.

Girma however broke the jinx and attained her degree in flying colours. She has also been involved in several cases on behalf of people with disabilities, and now focuses on advocacy work.

Girma’s accomplishments have awarded her mainstream attention from the likes of President Bill Clinton, Prime Minister Justin Trudeau, Chancellor Angela Merkel, and President Obama, who named her a White House Champion of Change in 2015.

She has also received the Helen Keller Achievement Award and a spot on the Forbes 30 Under 30 list.