48-year-old firefighter bags PhD from US university after 30 years of protecting his community, celebrates achievements 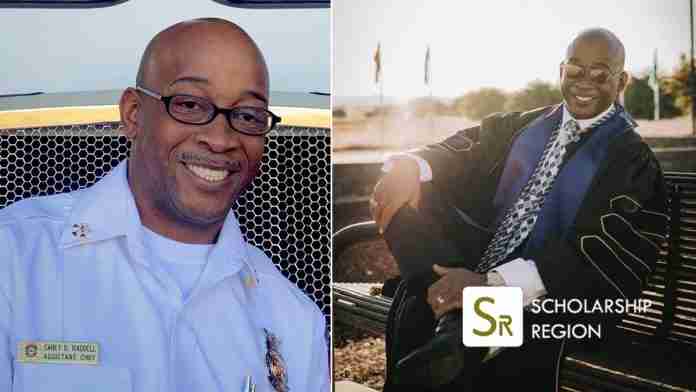 A brilliant and determined 48-year-old firefighter in the United States, Carey D. Waddell has earned a Doctorate Degree (PhD) from Grand Canyon University in Phoenix, Arizona, United States after 30 years of defending his community against fire disasters.

Carey D. Waddell joined the United States Air Force (Fire Protection) in 1992 and served as a firefighter up till 2022. Despite being an active and exceptional firefighter, Carey D. Waddell enrolled in university to earn his Bachelors, Masters and PhD degrees.

He started his higher academic journey in 2009, he enrolled for a Bachelor of Arts degree in Organizational Management Minor Public Administration at Ashford University and graduated in 2012. Immediately after his Bachelor’s degree, he commenced his Master’s degree education at Grand Canyon University.

Just two years after his Bachelor’s degree, Carey D. Waddell earned a Master of Science Degree in Leadership with Disaster Preparedness and Executive Fire Leadership. He thereafter enrolled in several professional studies to improve his skill to defend his community against fire disasters.

Finally, in 2019, Carey D. Waddell earned his PhD from the Grand Canyon University with a specialization in Leadership and Organizational Development.

He celebrated his achievement on LinkedIn narrating how he started his journey as a firefighter. “When the chips are stacked against you have to remember past accomplishments. I earned a Doctoral of Education degree with an emphasis in Leadership and Organizational Development in 2019. I’m ready for my next journey to the top in a new career. Won’t stop…can’t stop,” he wrote on LinkedIn.

He also added that he has retired voluntarily from the fire service after 30 years of fulfilling service. “I started as a firefighter worked my way through the ranks to Fire Chief and then retired on my own terms after 30 years,” he added.