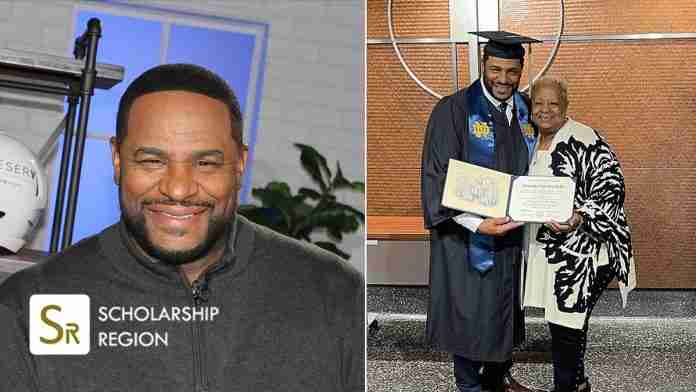 49-year-old American Football star, Jerome Bettis has returned back to university to complete his Bachelor’s degree after 28 years of leaving his education to focus on playing football.

Jerome Bettis who has achieved tremendous success in Football, becoming a member of the Pro Football Hall of Famer, returned to his alma mater – the University of Notre Dame – to complete his degree.

Speaking on how he feels after returning to school, Jerome Bettis narrated that it feels strange as he find himself behind the latest flow of activies. “It is so strange. Because I’m so behind the times. I mean, I’m a dinosaur in the sense of school. I don’t know where anything is. I’m struggling with the technology,” he told NBC.

While his classmates were taking note on iPads, Jerome uses an actual pad and a pen. During his time as a frontrunner, Jerome was nicknamed “The Bus” now gets lost in new buildings on campus like a college freshman.

Speaking on his decision to return to school, he explained that he had promised his mother that he will attain a Bachelor’s degree and must keep to his word.

“I promised my mother that I would get my degree,” he said. “In my immediate family, I’ll be the first person to graduate from college.”

“But most importantly, I have two children. For them to see dad finish a commitment that he set out some 27 years ago, for me to complete that, I think it says a lot to them,” he explained.

He noted that he is more focused on his education as he has retired from playing football. Jerome finally attained his Bachelor’s degree in 2022 and celebrated his achievement with his mother and family.

“I have been waiting 28 years to celebrate this moment. I am so proud to be a graduate of the University of @notredame class of 2022!! I can’t thank everyone who made this dream become a reality for me,” he posted on Instagram.