50-year-old mother who is deaf bags degree from US university, celebrates achievement with her helpful daughters 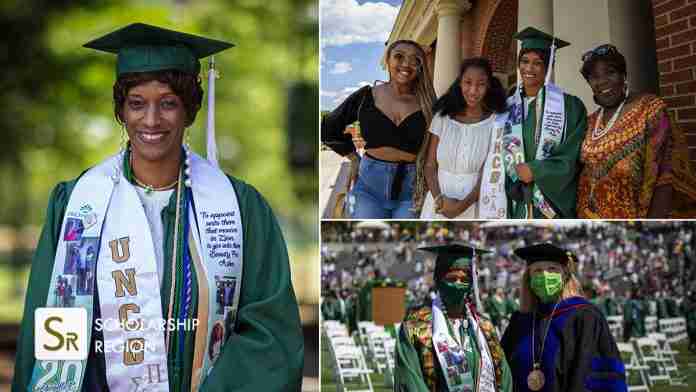 A 50-year-old mother of two named Michele Randolph, who was born deaf has graduated with a Bachelor’s Degree from the University of North Carolina, Charlotte, United States despite facing different challenges.

Michelle was born deaf and at the age of 12, she lost all of her ability to hear in its totality. Challenged by her inability to her, Michelle had to communicate by reading the lips of others as she did not understand sign language at the time.

Speaking on how she was able to scale through her academic journey, she explained that her achievement is a result of hard work and it was not an easy task for her. “I worked really hard for this; I worked really hard,” Michelle told ABC 11 News.

She had earlier bagged a Degree in Criminal Justice and a minor in political science from the University of North Carolina at Charlotte, United States. She however returned to the university for a second degree.

At the age of 47, Michelle re-enrolled to study History and Africana Studies at the university. She faced the challenge of having to raise her second daughter during the course of her study.

She was heavily dependent on her first daughter who helped her with phone calls and booking doctor’s appointments. Upon the birth of her second daughter, she was challenged again as her newborn was born with cerebral palsy, autism, and brain damage.

Michelle was also challenged with several surgeries that took a chunk of her time. In 2019, she went through a surgery that gave her another chance at hearing when she became a cochlear implant candidate.

That enabled her to hear her children speak for the first time since they were born. “When they activated me and I could hear their voices, I was amazed that how I imagined them to talk was actually how they spoke,” she said.

“It was just amazing. It was like a lightbulb clicked for me, and I knew then there was nothing, nothing anymore that I could not do,” she added.

Michelle however scaled through all obstacles to bag her second Bachelor’s Degree. “Sunshine after the rain: It felt good to be able to hear my name called,” she stated.