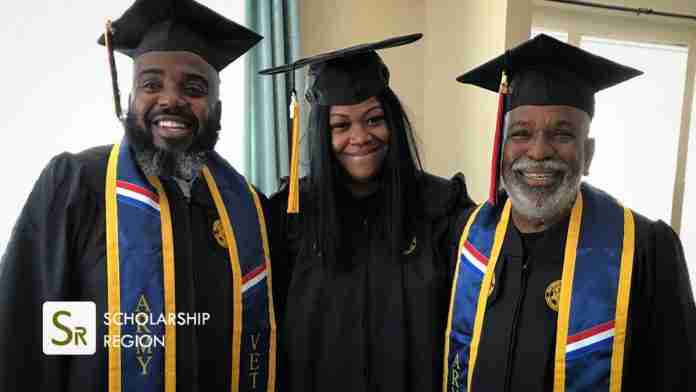 A 62-year-old retired US army veteran has alongside his son and his wife graduated from the same university on the same day.

The 62-year-old father by name Raymond Richardson, his 32-year-old son, Shamir Taylor and the wife of his son, Nyema Taylor all bagged their degrees from the  University of Maryland, Maryland, United States of America.

They all graduated after several challenges individually only to be united at the point of graduation. Raymond Richardson has tried to achieve a Bachelor’s Degree for 30 years as he was highly engaged in the US Army.

He was able to complete his study after retirement despite his age. His son, Shamir Taylor, managed to continue his studies in between military deployments as he followed to footsteps of his father by joining the US Army.

Nyema Taylor faced the biggest challenge after being diagnosed with breast cancer and had to struggle her way through university. She graduated with a Bachelor’s Degree in Graphics Communication.

“When I found out the news about my breast cancer, it really knocked me off my feet. I felt defeated and deflated. And it was my husband and my family and my father in law who helped me get through..,” Nyema said.

Getting an outstanding academic success is a dream for many, no matter the age. At Scholarship Region, we keep track of Scholarship opportunities around the world that can aid and finance all your academic dreams.

Raymond Richardson, Shamir Taylor and Nyema Taylor all adjusted their course works to arrive at the day when they all graduate from the University of Maryland, University College on the same day.

“It’s one thing to be graduating and walking down the aisle. But to be walking with two of the most important people in my life, it’s amazing. Amazing!,” Nyema told Blacknews.

They were hoping they serve an inspiration to everyone around the world, especially the Taylors’ two children.

“They’re like sponges right now. They look up to us. We want to do everything we can do to make sure their future is secure,” Nyema said of her two children.

“It just goes to show you,” Richardson said. “You’re never too late to get an education.”