62-year-old woman graduates from US university same time with her grand-daughter who is 25, celebrates achievement 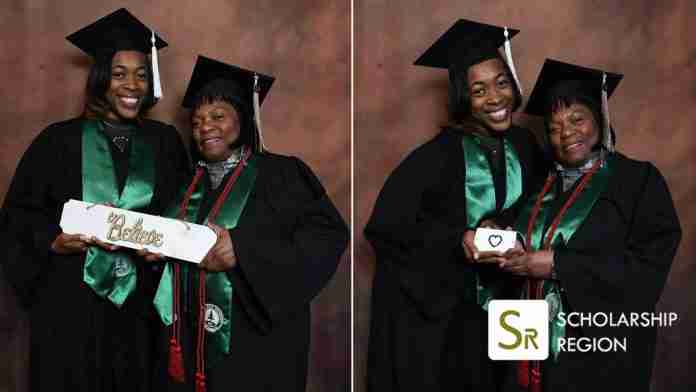 An exceptional grandmother, Belinda Berry, who is 62 years old has set a new record at the Chicago State University, United States after graduating at the same time as her granddaughter who is 25 years old.

Belinda Berry and Karea Berry, her granddaughter both earned their college degrees on the same day from the Chicago State University and became the first-ever grandmother-granddaughter duo to graduate from the institution simultaneously in the school’s 150-year history.

Speaking on her achievement, Karea Berry says her success and that her grandmother meant the world to her. “It meant the world to me, because that’s the person, aside my from my daughter, that means the most to me. To be making her proud while she was making me proud was so awesome,” she said.

Karea Berry who is also a mother of one revealed that they are both enrolling for a Master’s degree to advance their education. She narrated that she did not imagine she would be graduating at the same time with her mother when she enrolled.

However, two years after she commenced her studies at Chicago State University, she took time off after her daughter was born. She returned full-time in after earning enough money to continue her education and by that time, her grandmother had catch up with her.

Studying in the United States opens you to countless possibilities and connections with world industry leaders. At Scholarship Region, we keep track of Scholarship opportunities around the world that can sponsor your education so as to inform and remind you whenever they are available.

When Karea resumed after her child was born, she admitted that she initially was not thrilled running into her grandmother. I was like, ‘Oh my God, no. My grandma is on campus yelling my name?’ She’d say ‘Don’t you have to be in class?’ ” she narrated.

After a few years together at the university, they became a support system for each other. “Just knowing she was there brightened my day,” Karea said.

Karea received her bachelor’s degree in criminal justice and plans to pursue a master’s in mental health counselling. Her grandmother, Belinda, who had graduated high school in the 1970s finally earned her bachelor’s in business administration as one of the top students in their class of 457 graduates.

Karea hopes to start her career as Chicago police officer and then wants to open a community resource center in Englewood, one of Chicago’s poorest and most violent neighbourhoods. Her grandmother, Belinda, Belinda hopes others looks to her example.

“I would like to be an inspiration to the young and old as well. You can achieve whatever you want to no matter what your age,” she said.