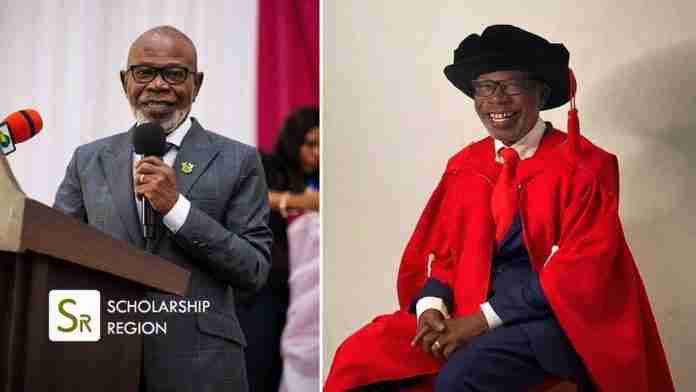 A 75-year-old man named George Ayisi-Boateng has returned to the university to earn his Bachelor’s, Masters and Doctorate (PhD) Degree after many years that he dropped out of school due to financial reasons.

The 75-year-old Dr George Ayisi-Boateng faced challenges with his education while he was young. His father died when he was in primary three and had to be raised up by a single mother who had 15 other children just like him to cater for.

The young Dr George however needed to struggle for himself despite all the challenges. He rose through his personal struggles and became highly successful. His motivation to work harder was his personal resolve to ensure that all his children were highly educated.

In 1994, Dr George was able to obtain an Advanced Level (A-Level) certificate through private studies. He ensured all his children enrolled in school at a young age – his first daughter had finished school and had started teaching at St Louis Secondary School in Kumasi, and the second was at the Kwame Nkrumah University of Science and Technology (KNUST).

His third child had finished university in Canada, the fourth was in the 5th year at the School of Medical Sciences (SMS) at KNUST and the last born was in the nursing training school.

Having ensured that all his children have achieved various reputable levels of education in 2005 (11 years after obtaining an A-Level), Dr George took a firm decision to go back to school for higher learning.

He wishes to achieve a feat his father was unable to provide for him during his lifetime. He had a discussion with his family and some friends, and that is how the journey started, Graphic Online reported.

Dr George who was at the time 60 years old enrolled on evening part-time classes at the erstwhile Kumasi campus of the University of Education, Winneba (UEW) now Akenten Appiah-Menka University of Skills Training and Entrepreneurial Development (AAMUSTED).

Eager to study ahead, Dr George proceeded to the University of Witwatersrand in South Africa and at the age of 75, he bagged his PhD Degree from the university.

In 2017, he was appointed as the High Commissioner of Ghana to South Africa, a position he held until 2021.

He dedicates his successes to his family and inspired many not to give up on their dreams.