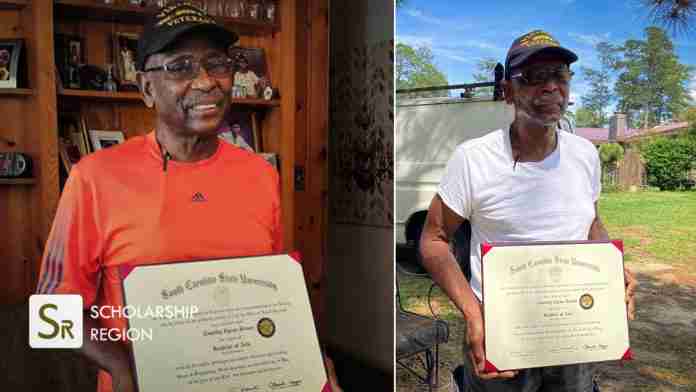 A 77-year-old war veteran has finally bagged his Bachelor’s Degree from the South Carolina State University years after dropping out in the 1960s to defend the United States at the Vietnam war.

The 77-year-old man known as Timothy Brown hails from Orangeburg County, South Carolina. He was a student of Compton Community College in California, United States when he to serve in the Vietnam War and had to drop out of school.

After the war, Brown moved to South Carolina to focus on work and thereafter took some courses at a local school for one semester. CBS News reported that, in 2018, Brown found out about a veteran affairs program that helps vets go back to college.

He decided to seize the opportunity and enrol at South Carolina State University for a Diploma Degree majoring in drama. At that time, he was 73 years old.

“I’m sitting in class with my grandkids. I always told them, ‘Hey, you know, you guys are my grandkids.’ You know, they’re in their early 20s and here I am in my middle 70s,” Brown told CBS News.

After over 3 years of studying hard, Brown earned his Bachelor’s Degree in Drama from South Carolina State University, United States, making him one of the oldest persons to achieve such feat in the country.

Achieving your study dream has no limts and should be explored no matter how long it takes. At Scholarship Region, we keep track of Scholarship opportunities around the world that can fund and help you achieve your dream.

Brown noted that if he had not received the opportunity to go back to school, he might not have put this memory to paper and written a play as his academic project.

He had worked on writing a story inspired by a real-life experience – traveling 6,000 miles round trip to see Dr. Martin Luther King Jr. speak in 1968.

“It’s a true story where we actually drove a church bus…from Los Angeles all the way to D.C. for Dr. King’s last march,” Brown said. “When he finished his speech that day, he came down off of the podium, and we just happened to be in his path. So, we were able to shake his hand, and i was able to take a snapshot of him and my pastor.”

“So, it was a rewarding trip and experience because we never dreamed we would have this opportunity to shake the man’s hand,” he said.

Now, Brown is working to seek producers to hopefully bring to life the play he wrote based on his experience driving the bus from Los Angeles, California to Washington DC during the civil rights movement. He plans to help send underprivileged youth to college with the proceeds from the play’s ticket sales.

“I do believe in my heart that we need to put this out so that the younger generation, younger folk, can see this and say, ‘Okay, our ancestors, some of those in the front of us actually did a lot to sacrifice so we could have these freedoms and equality that we have,” he said.

“As long as you have your health and strength, you’re never too old,” Brown said about his unique achievement.