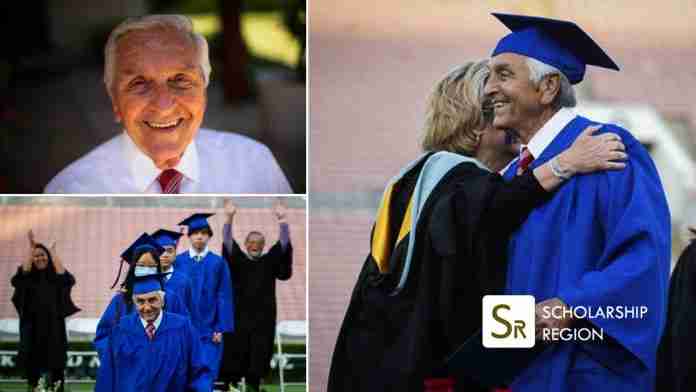 A 78-year-old man named Ted Sams has finally graduated from high school sixty years after dropping out over his inability to pay a $4.80 book fee.

Ted Sams was a student of San Gabriel High School California, United States in 1962 but unfortunately, a series of setbacks, including a $4.80 book fee, forced him to drop out without a diploma.

Sams problems began when he was suspended by the school five days before the end of the school year. He had to miss a key final exam as a result of the ordeal, which he made up for during the summer of the year.

Sams later encountered another stumbling barrier in his quest to graduate high school which was the book cost. “When I went back with my grade, they wouldn’t give me my diploma because I owed $4.80 for a book and so I just walked away and said forget it,” Sams said.

Since then, Sams has regretted not walking at his high school graduation. But, it’s a story he said he has shared with his children for quite some time.

Sixty years after, Sams came back for his diploma with the 2022 graduating class. He said he was both nervous and excited about his big day and called it one of the best days of his life.

“When you get your picture taken and people are cheering for you, what do you expect? I didn’t expect all of that, either, but what can I say?” he told the outlet.

According to the Star-News, Sams’ daughters Sherry and Sally, as well as their husbands, attended the Friday’s event after contacting the school about their father’s graduation a few months previously.

Sherry said everyone on stage hugged her father when he walked and got his diploma. He then received a round of applause from the graduating class of 2022.

“They knew he was there from 1962 and they knew his story because the principal had talked about it,” Sherry said.

“So both I and my sister got teary because kind of the whole stadium came to a standstill,” she added.

“”We enjoyed 💖 meeting you and your beautiful 🥰 family and are thrilled to have helped make your 60-year-old dream come true‼️,” the district added.