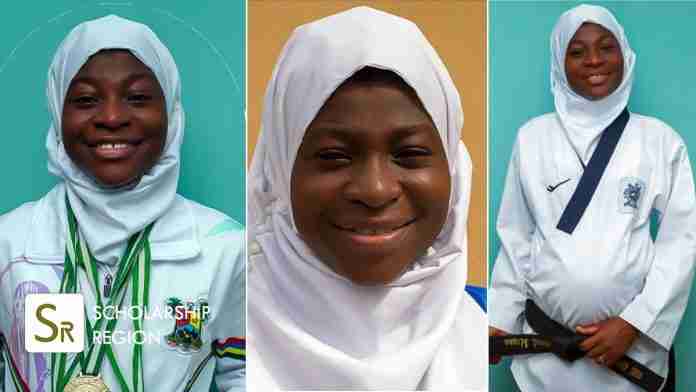 An 8-months-old pregnant Nigerian martial artist, Aminat Idrees has set an outstanding record after beating all other contestants to emerge the winner of the Nigerian National Sports Festival despite being pregnant.

Aminat Idrees who was representing Lagos State in the competition has been an outstanding Taekwondo fighter before getting married in 2020. She narrated that she ought to have participated in the competition before her pregnancy but the completion got postponed due to the country’s lockdown at the time.

She however stunned many around the world after displaying an amazing performance in the Taekwondo poomsae competition despite being 8-months pregnant. Her outstanding performance won her gold in the pair poomsae, silver in the team poomsae, and bronze in the individual poomsae.

The Taekwondo Poomsae is a non-contact event involving a series of synchronized demonstrated moves simulating attack and defense.

Her performance was extraordinary for a pregnant woman and did not go unnoticed as she made headlines across the world. “It’s such a privilege for me. I just decided to give it a try after training a couple of times…It feels really good. Before I got pregnant, I have always enjoyed training, so it didn’t seem different with pregnancy,” Idrees told reporters.

She explained that she prayed before going in for the competition, sought the approval of her husband, consulted her doctors, and thereafter got the approval of the Nigeria Taekwondo Federation.

With strong determination, there are lots of records that you can break. At Scholarship Region, we keep track of Scholarship opportunities around the world that can sponsor your education abroad so as to inform and remind you whenever they are available.

Speaking on her participation, Aminat Idrees said: “I decided to participate in this tournament because I know that it is something I could do. I’ve been training consistently and there [hasn’t] been much difficulty during and after training. My coaches believe in me as much as I believe in myself. I was ready physically and mentally for the tournament despite my pregnancy, since it wasn’t combat it was just a demonstration.”

“Moreover, the major poomsae events at the festival lasted for about two hours, which is more like my normal training duration so it was just as normal as any training day,” she added.

Aminat Idrees is not new to winning medals, pregnant or not. At 18-years-old, she won her first major medal at the 2012 sports festival when she claimed gold in the team poomsae.

She has won medals every year since in poomsae (demonstration) and kyorugi (combat) competition, at the Korean Ambassadors’s Cup, the Nigerian National Sports Festival and the IBILE Games – Lagos State’s annual sports festival.

“This is not the first time I am winning medals in poomsae so they knew that I was experienced,” Aminat Idrees explained to ESPN.

“If I was a newbie, probably it would not be possible [officials to allowed her to compete while pregnant]. But it is something I have been doing so they believed in me,” she added.