81-year-old man returns to university after 50 years of dropping out, graduates with outstanding grades 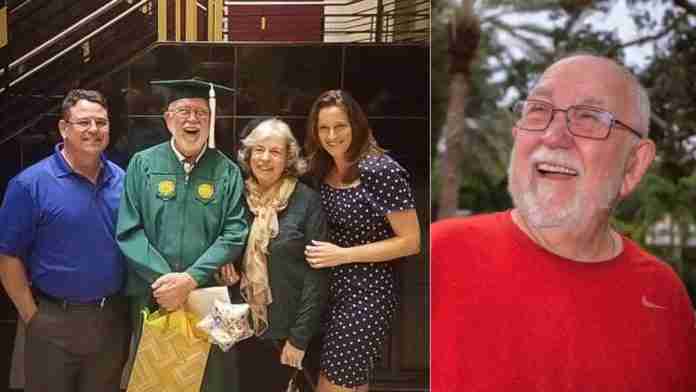 An 81-year-old grandpa known as Way Bandy has finally graduated with a Bachelor of General Studies from the University of South Florida St. Petersburg (USF), United States, 50 years after he abandoned the program.

Way Bandy first enrolled for the Bachelor’s degree program in 1974 but abandoned the program at a point where he was only required one course to graduate in 1978. He explained that he dropped out of school to get married and start a family.

Not too pleased with the way he dropped out of school, Way Bandy’s mother ensured he gave her his word of honor that he will return to school to complete his Bachelor’s degree program. According to him, his mother taught him never to fail in his words of honor.

“My mother, bless her heart … the thing she drilled into me as a child was, ‘The two of the most important things are your health and your word of honor. [She said to me]: I want your word of honor that one day you’ll go back and get your degree,” Bandy narrated.

His mother died in 2003 and Bandy did not fail his word of honor to her. 50 years after abandoning school, he returned to the University of South Florida St. Petersburg (USF) to honor his promise to his mother and graduated with flying colors.

His graduation at such an old age inspired many to understand that it is never too late to acquire an education.

At Scholarship Region, we keep track of Scholarship opportunities around the world to assist you to acquire an education for free.

Celebrating his feat, Bandy says he hopes to inspire other students, of any age and generation, to complete school if they have the opportunity to.

“Take your time, stay ahead of your goal and promise yourself you’ll finish,” he advised. “Whatever motivates you to do it, do it. If I can do it, anybody can — and I promise that from the bottom of my heart.”