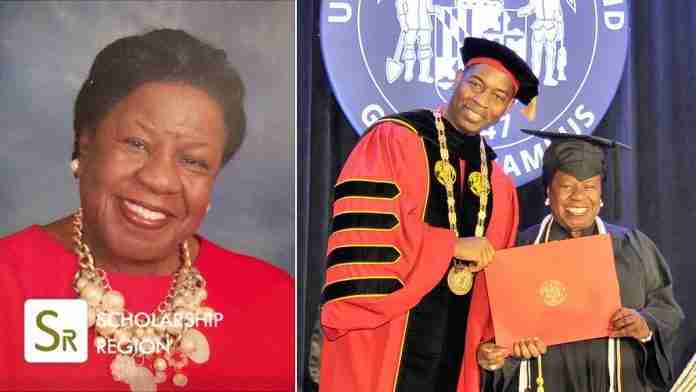 An exceptional 82-year-old, Mae Beale has inspired many across the world after earning a Bachelor of Science degree in Business Management from the University of Maryland Global Campus (UMGC).

Mae Beale received her certificate just a day after celebrating her 82nd birthday. According to a news release by the University of Maryland Global Campus (UMGC), Mae Beale returned to school in her late 70s to pursue a Bachelor’s degree.

“Over her long career as an LPN in Washington, D.C., Beale worked at health care and government agencies in the area, including Children’s National Hospital, the National Naval Center (now Walter Reed National Military Medical Center), the Washington VA Medical Center Hospital, and later joined the Department of Health and Human Services,” the statement read.

“It was at the Department of Health and Human Services’ Centers for Medicare and Medicaid where Beale’s career pivoted toward business and event planning,” the statement continued.

Mae Beale opined that her supervisors thought she had something special as she organized large events while she was working at the Centers for Medicare and Medicaid Services.

In 1994, at the age of 54, Beale started her own event-planning business and started working toward her associate degree in Business Management at Howard Community College, according to the release.

“I wanted to make certain I had the time to devote to whichever class I was taking. I was like the tortoise. Slow and steady wins the race,” she was quoted to have said.

“I discovered that I had to be intentional about it and make it my priority,” she added.

Despite being the oldest in her class, Mae Beale devoted much of her time to helping others. ” For four years while she pursued her degree, she served on the UMGC Student Advisory Council. Even after she finished her coursework, she continued as an ex-officio member until her term ended in December 2020. In January 2021, Beale was honored as Volunteer of the Month,” the statement read.

Beale, who participates in several local boards in Maryland as a community advocate, told the university the degree has given her a greater sense of self-confidence: “I knew that if I had the degree, it would solidify things and make me feel more comfortable.”

She encouraged others to pursue higher education with an open mind. “Expose yourself to as many possibilities as you can because you never know what life will present,” she said.