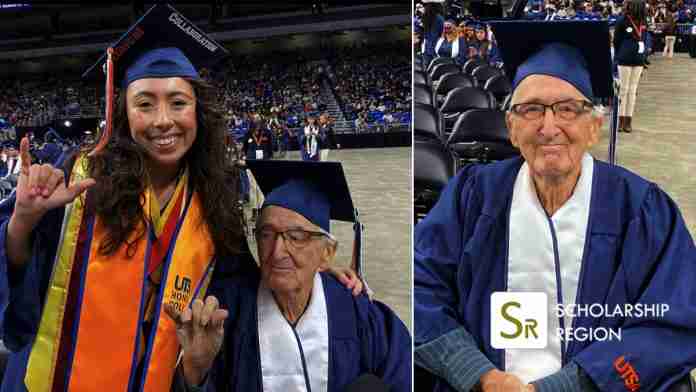 A determined 88-year-old man named Rene Neira has successfully earned a Bachelor’s degree from the University of Texas-San Antonio in the United States after being out of school since the 1950s.

Rene Neira graduated from the university with a Bachelor of Arts (B.A) in Economics. His 23-year-old granddaughter, Melanie Salazar who graduated at the same time as Rene Neira described her grandfather’s achievement as special.

She narrated that Rene Neira had always dreamt of earning a college degree but could not achieve it until he reached old age. According to her, he has been in and out of school since the 1950s. However, when he fell in love and got married, he could barely finish his studies. So, he decided to quit school to focus on raising his family.

Melanie and her grandfather joined the University of Texas-San Antonio together and they finally graduated together. Melanie graduated with a Bachelor of Arts (B.A) in Communications.

“I’m so proud of my grandpa for finishing his first day at PAC this semester! 82 years old and not giving up!!!” she wrote in a tweet.

Melanie Salazar who pushed her grandfather in a wheelchair during graduation narrated that she almost cried out of happiness as everyone applauded him.

“I wanted to cry out of happiness, that I was able to have that memory. And really because I’m so really proud of my grandpa knowing and seeing how hard he has to work,” she said,

Although both of them did not take any classes, Melanie stated that they were both very close throughout their academic years. “There were times when we would get lunch together. Be in the library together, and just work silently side-by-side,” Melanie recounted to GMA.

Rene Neira on his part said he is proud of his granddaughter as she is of him. “It was special for both of us to go to the community college at the same time,” he said.