90-year-old woman bags 5 degrees in Karate fighting skill, becomes one of the best fighters in the world 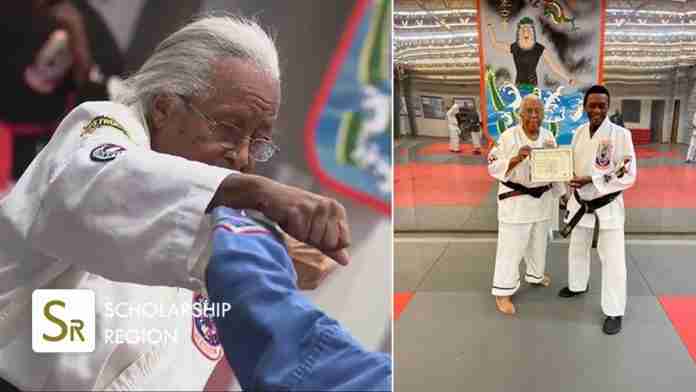 An exceptional 90-year-old woman from Southfield Michigan, Thelma Jones has achieved a scholarly feat after earning a fifth-degree black belt in Isshinryu karate despite her age.

Thelma Jones has been learning Karate fighting skills since she was 40 years old. She received her fifth-degree black belt as part of her celebration for her 90th birthday and plans to go further in her career.

According to her, she has been able to use her skills to defend herself against criminals. Her trainer, grandmaster Willie Adams described her as a tough woman.

Grandmaster Adams who is currently on his 10th-degree black belt is 77 years old. He trains Jones three times a week at Southfield Martial Arts Institute in Michigan, United States.

His training has helped Thelma Jones develop her Karate skills. “It really does teach you to listen, behind you, in front, and be aware of all things,” Jones said.

Thelma Jones while explaining the benefits she got from focusing on her fighting skill recalled the time she had to use her karate skills to fight off robbers at a bus stop when she was 60 years old.

“I crossed the street back, and he came at me. So, I went into the liquor store and waited until he left. That was karate right there, that was using your brain. I didn’t want to duke it out with him,” she narrated.