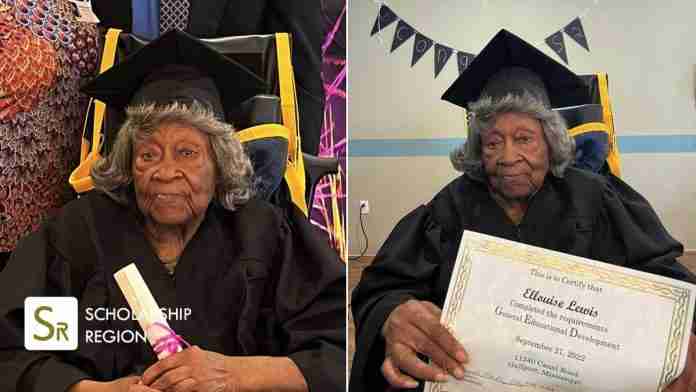 A 90-year-old woman from Mississippi, United States named Ellouise Lewis has fulfilled her lifelong dream of earning a Diploma certificate after being awarded an honourary GED thanks to the help of reputable people in her community.

Ellousie Lewis who left school in the 10th grade narrated that she missed getting her GED certificate by 1 question when she was younger and always regretted not going back to get it. Her story got the attention of Gulfport Care Center and they decided to help her achieve her dream.

The Gulport Care Center shared in a post on Wednesday that immediately they got aware of Ellousie Lewis’s story, their “team went right to work to help make it happen”.

When Ellousie Lewis was informed about the Gulfport Care Center’s mission to help her achieve her dream, she expressed delight. “When they told me here I could get my GED, I was happy about that. I’m always happy. Excuse me, because it makes me happy to know I can do it,” Lewis commented.

The Activities Director of the Gulport Care Center, Lisa Perdue explained sought out a school and eventually found Wells of Southgate who presented the certificate to Ellousie Lewis.

“She took a modified test and was presented her honorary G.E.D. with family and friends cheering her on,” Gulfport Care Center posted on Facebook.

The Gulfport Care Center thanks the local Christian learning centre for presenting Ellousie Lewis with an Honourary GED certificate and making her dream come true. “Thank you to Leonard and Linda Martin at the Christian Education and Training Center for your assistance with the test. CONGRATULATIONS TO OUR GRADUATE,” the care centre said.

In another story, an exceptional 101-year-old man named Merrill Pittman Cooper finally bagged his High School Diploma after abandoning his studies in 1938 due to the civil war and financial crisis he encountered.

Merrill Pittman Cooper describes his achievement as a long life dream citing that he was enrolled in school between 1934 to 1938 but had to drop out.

According to his story, he was a student at Storer College in Harpers Ferry, West Virginia, United States, a boarding school founded after the Civil War that initially educated formerly enslaved children, between 1934 and 1938. Click HERE to read more about Merrill Pittman Cooper