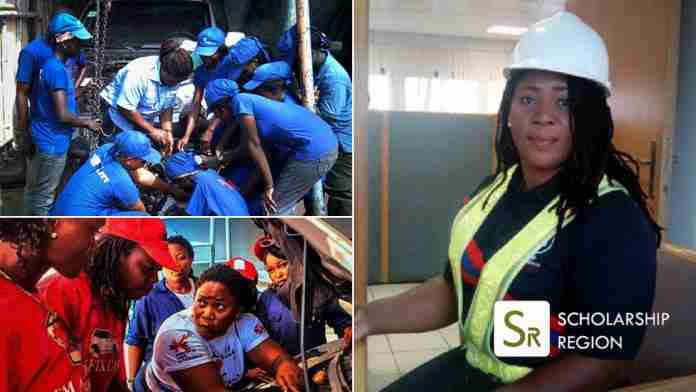 Sandra Aguebo who recorded the extraordinary feat of being a female mechanic despite facing much ridicule devoted her life and career to helping young girls become engineers.

She graduated from the Auchi Polytechnic, Nigeria, West Africa with a Diploma in Mechanical Engineering and has since been at the forefront of building female mechanics. “For me to become the first female mechanic in Nigeria, I had to work five times harder… and prove myself,” Sandra told CNN.

Sandra revealed that she first became interested in automobiles when she was 13 years old. When she told her father, he was shocked and tried to talk her out of it. Sandra, on the other hand, was adamant about pursuing her dream.

She began her career by working at a local garage where she learned everything she knows and uses to train young girls.

Few years after graduating with a Diploma in Mechanical Engineering, Sandra set out to help 100,000 young women become mechanics and add value to the field which is known for having just men.

She founded an institution known as The Lady Mechanic Initiative, which teaches women from all walks of life how to fix cars and become financially self-sufficient.

Studying and learning new skills empowers you to actualize your dreams and make you financially self-sufficient. At Scholarship Region, we keep track of Scholarship opportunities around the world that can help you achieve your study abroad dreams.

As of 2022, Sandra’s institution has empowered 4,000 girls from all over Africa, completed more than 50 technical and mechanical projects and explored more than 60 new ideas in the field of Engineering.

Her ultimate goal is to empower 100,000 young girls across Africa.