Brilliant Man becomes the first-ever Nigerian to graduate as a Doctor from Russian university after rejection in Nigeria for being a poor student, bags 100% grade point 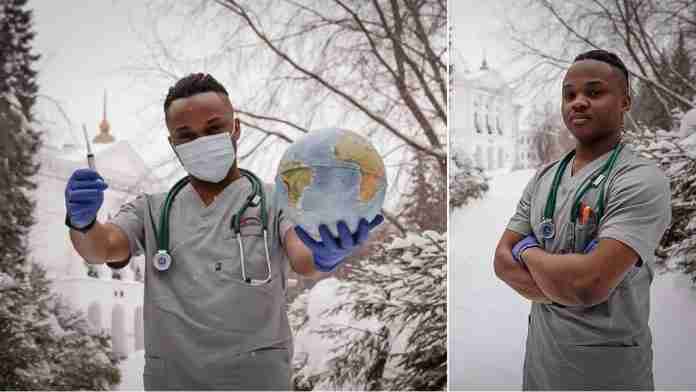 A brilliant man has became the first-ever Nigerian to graduate as a Doctor from Russian university after being rejected in Nigeria for being a poor student.

Olewuezi was considered incapable to study medicine in Nigerian universities after writing the country’s university entry examination known as Unified Tertiary Matriculation Examination (UTME) twice, scoring 247 and 260 respectively but was denied admission due to his perceived poor performance.

He said, “I had always wanted to study abroad and obviously make something of myself back in Air Force comprehensive school, Enugu. So after failing to gain admission twice even with JAMB scores 247 and 260 respectively, I decided to study abroad.

“So after talking with a Russian-trained medical doctor, I decided to go for it (study in Russia),” he narrated.

At Scholarship Region, we keep track of Scholarship opportunities around the world to inform and remind you whenever its available.

Although Russia is presently inaccessible for scholarships, several scholarship opportunities are ongoing in Europe, USA, UK and Canada that you can explore. Here are some ongoing scholarships you should check out;

Narrating his story on how he emerged the first Nigerian to graduate as a medical doctor the Russian institution, Olewuzi said he was able to achieve the feat because most Africans preferred to study in the west part of Russia.

According to him, Africans and Nigerians do not normally come to Tomsk city to study rather they preferred to study in the west part of Russia.

“Yes, I am. As a matter of fact, a lot of Africans didn’t come through this city 6-10 years ago and most African/Nigerian students preferred to study in the west part of Russia,” he said.

Not only did Dr Olewuezi become the first Nigerian Doctor to graduate from Siberia State Medical University in Tomsk, he also graduated with the highest grade the university achievable in the institution.