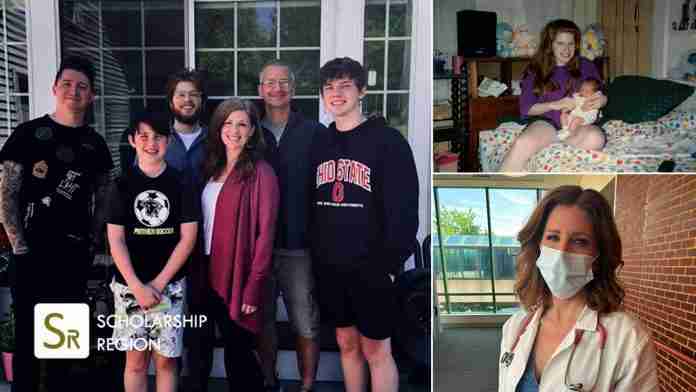 A brilliant and determined teen mom has achieved her dream of becoming a medical doctor despite having to abandon her education at a very young age of 15 due to pregnancy.

Katie Clark, who is now 43 years old became a Doctor after giving birth to four children and proved that getting a degree is not too late to achieve. She had dreamt of being since she was in third grade.

She got her first pregnancy as the age of 14 while she was in high school and gave birth shortly after her 15th birthday.

“There was a recognition that I was going to be young and this was going to change my life,” Clark says of the “unexpected and unplanned” pregnancy, which turned out to be “really difficult and challenging” due to nausea and fatigue.

“I remember jumping up in the middle of class to run to the bathroom and not even making it,” she says. “I threw up in a trash can in the hallway.”

She missed her college qualifying exams and was unable to get a scholarship to college. She still graduated, and at the age 18 and enrolled at Case Western Reserve University in Cleveland, Ohio.

A few months after her freshman year began, she became pregnant with her second son and had to dropout to raise her two children.

Two years later, Clark met her future husband, Curtis Clark, who happened to be the older brother of a high school friend. She was 20 at the time, and he was 22.

Curtis and Katie wed in 2001, and Curtis adopted his new wife’s two sons. The two went on to have two sons of their own and moved around the country as her husband continued his schooling, medical residencies and fellowships in pediatric urology.

It wasn’t long until Clark had a turn at following her dreams, though. At the age of 25, she re-started her academic career at a local community college, where she earned an associate’s degree.

Clark then enrolled at the University of Kentucky, where she earned an undergraduate degree in anthropology at the age of 28.

After returning to the suburban Cleveland area with her family, Clark finally saw her chance in front of her.

So at 34, Clark began classes at Kent State University in Ohio, where her oldest son was a freshman in high school and her youngest was in preschool. She graduated with a biology degree in two years.

She then attended medical school at Heritage College of Osteopathic Medicine, an Ohio University program affiliated with the Cleveland Clinic, from which she graduated at 40.

Upon graduating from medical school, Clark became a doctor of osteopathic medicine (D.O.) and started a family medicine residency at Cleveland Clinic Akron General in Ohio. In June, she will finish her three-year program and become an attending physician at Akron General Health and Wellness Center in Stow, Ohio.

Clark’s experience “gives her deep and valuable relationships with her patients,” said Dr. Douglas Harley, director of the Family Medicine Residency Program at Cleveland Clinic Akron General. “It’s obvious watching her in the clinical care setting, there is a level of being present in the moment, connected and focused, that is rare and special.”

Clark believes her life story will give her the perspective and confidence to make her a compassionate and caring physician. And if she has a patient who is a teen mom, she already knows how she’ll react.