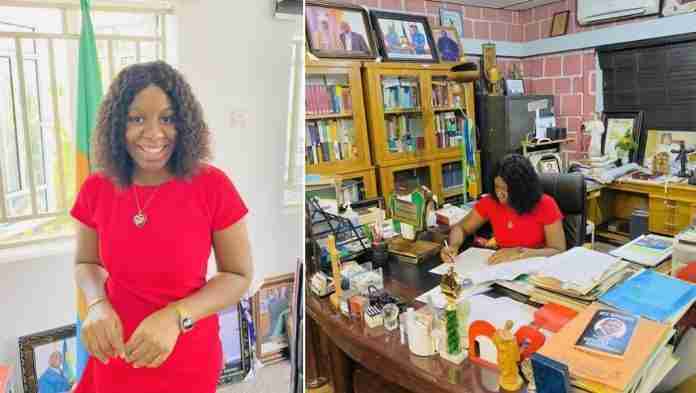 A brilliant Nigerian student at the Godfrey Okoye University in Enugu State, South Eastern Nigeria, has been appointed as the Vice-Chancellor of the University for a day after making a perfect 5.00 CGPA.

The student named Kaitlin Gee-Akwada studies English and Literary studies in the University. According to the University’s statement announcing her appointment, Miss Gee-Akwada was appointed for having a perfect Cumulative Grade Point Average (CGPA) of 5.00.

The University wrote on Facebook (27th of October 2021): “Congratulations to Miss. Kaitlin Gee-Akwada GOUNI VC for one day with a 5.0 CGPA. The one day VC arrived at the VC’s office at 7:57am to discharge her duties as Vice Chancellor, she was received by Staff of the VC’s office and the GOU Foreign Liaison Officer, Meggy Kantert.

Miss Gee-Akwada who had all her early education in Calabar, Cross Rivers State, Nigeria was very happy to have made such feat especially in a state outside her primary state.

She took to her social media pages to celebrate her accomplishment and encourage the upcoming generations. She wrote (on Instagram): “Today, I was declared the Vice Chancellor-for-One-Day in my university, Godfrey Okoye University, with a CGPA of 5.00. This is not only an answered prayer, but proof that the power to attract what you desire lies in your hands.”