Brilliant quadruplet brothers wins scholarship to study in the same US university, graduate at the same time with excellent grades 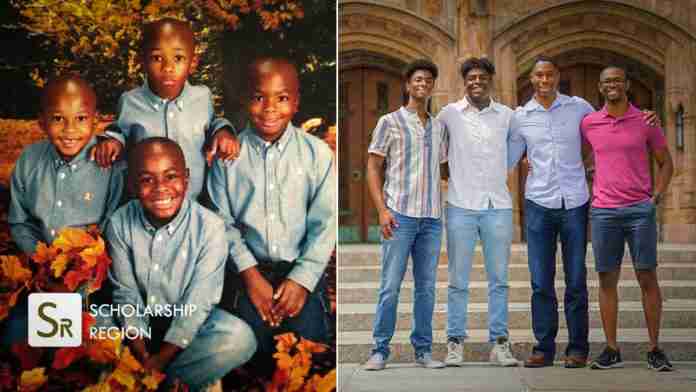 22-year-old brilliant quadruplet brothers in the United States have inspired many after graduating together from Yale University, New Haven, Connecticut studying different courses.

The four of them opted to enrol at Yale University where they were awarded financial aid to study their course of choice. However, they decided to separate ways and stay in different residential colleges to take on their journey in their careers as individual personalities.

“In high school, we all knew the same people. So in a sense, that didn’t allow us to divert as much as we might’ve wanted to. But in college, because there are so many different types of people, and we had so many different diverse interests, I think we were able to carve our paths in our own way,” Nick narrated to People.

Studying with Financial aid allows you to enrol in universities at no risk. At Scholarship Region, we keep track of Scholarship opportunities around the world to inform and remind you whenever its available.

The Wade brothers studied courses varying in sciences, economics, medicine and more. Aaron double majored in computer science and psychology while also being a musical director of an acapella group.

Nick, who worked with refugees and immigrants, pursued a degree in political science with a minor in Arabic. Zach double majored in chemical engineering and economics and became president of the National Society of Black Engineers at school.

Nigel majored in molecular, cellular, and developmental biology, and plans to continue being a medical doctor. It’s those wide-ranging interests that the siblings say allowed them to construct identities of their own on campus — in fact, in four years, they only overlapped in class once, with Aaron and Nigel finding themselves in the same 2,000-person psychology lecture.

They have all graduated from Yale University and now have to live separately as they have been engaged in totally different activities.

Aaron, who will spend one more semester at Yale to complete his senior thesis, will officially graduate in December and move to New York City to work for Google. Nick and Zach will be working at Goldman Sachs, with Nick in New York City and Zach in San Francisco. Nigel is doing research in New Haven before applying to medical school.