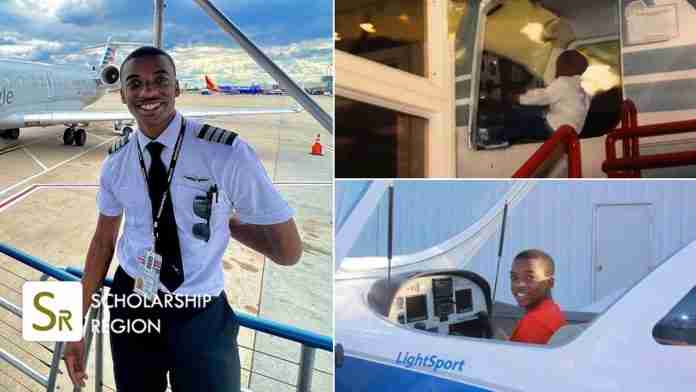 A determined young American man named Delante Sykes has proven to the world yet again that dreams do come true after studying for 11 years of his life to become a pilot.

Delante Skyes has dreamed of becoming an Aeroplane pilot since he was a kid. He shared images of himself being pictured trying to fly an Aeroplane at the age range of 2 years old. Delante who has ever since pursued his passion enrolled to learn the skill.

In 2017, he graduated from Ashbrook High School in Gastonia, North Carolina and immediately got enrolled to study Aviation at the University of North Dakota, United States. By 2020, Delante Skyes graduated with a Bachelor’s degree in Aviation Management with a 3.73 GPA and looked forward to flying.

He enrolled for Pilot training at the University of North Dakota from 2020 to 2022 until he became a Stage Check Pilot. Shortly after the completion of his required qualifications at the university, Delante Skyes got selected in the 1st round of the airline draft by American Airlines.

His Father, Valentino Skyes shared his proud dad moment on Facebook. “Proud Dad Moment Alert. My son was selected in the 1st round of the airline draft by American Airlines. He was drafted as an First Officer. Last week he took to the skies flying passengers around the country. Congrats First Officer Delante ”The Durag Pilot” Sykes,” Valentino wrote on Facebook.

Delante Skyes says he feels more than amazing to finally be at this step in his career. He narrated that he started his journey has been on for 11 years and his dream is finally coming to pass. “It’s been a long 11 year journey. First and foremost I want to thank God for covering me and allowing me to see this day,” he said.

He thanked his parents and friends “for pushing me to keep going when I wanted to stop”.