Disabled man who has been in wheelchair since 2009 bags Bachelor’s degree, walks gallantly on his feet to receive award 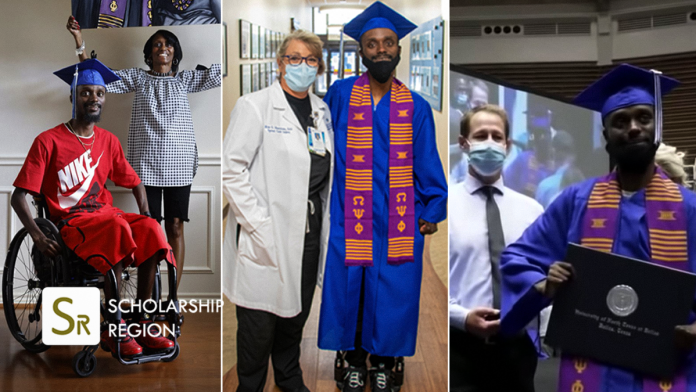 It was an exceptional moment at the University of North Texas, Dallas, United States after Corey Borner, a native of Texas who became paralyzed in 2009, walked gallantly with his feet to receive his Bachelor’s degree certificate.

Corey Borner was a DeSoto High School football player. In 2009, when Borner was just 16, he took a hit during a football match that made him suffer a severe spinal cord injury and left him paralyzed. “As soon as I made a hit, I couldn’t move from the neck all the way down to my feet,” Borner told the news station.

Ever since 2009, Corney Borner has been in a wheelchair and has never set his feet on the ground. However, the Texas-born made his college graduation special by walking in public for the first time when he graduated from the University of North Texas at Dallas.

He narrated his story on graduation day as a motivational speaker noting that he made it his mission to walk again. “We all go through something. That’s one thing about life. But as long as you continue to stay focused and stay positive, anything is possible,” he explained.

He has been participating in rehabilitation with the goal of using his legs again. To the surprise of the graduating students and guests, Borner used an exoskeleton to rise from his wheelchair and walk to receive his diploma. The machine was made by the Baylor Scott & White Institute for Rehabilitation in Dallas, United States.

“Retweet this forever. So I shocked the whole world,” Borner tweeted after walking on the stage despite being paralyzed. “When you surprise the world walking across to receive your communication degree,” he wrote about the emotional moment.

“This is the biggest moment in my life! I will continue to never give up and inspire the world with my testimony. I walked again! #Findaway.” he added.

Borner graduated from the University of North Texas at Dallas with a degree in communications technology. He praised his mother for her love and support, which helped him reach the milestone.

“You are the greatest mother ever! I give you lots of hugs sitting. But today I had to kiss you!” he wrote to his mother alongside a picture of the two.