Emotional story as Man whose mother died of blindness and brain disease celebrates bagging a Master’s degree in Medicine, dedicates success to mom 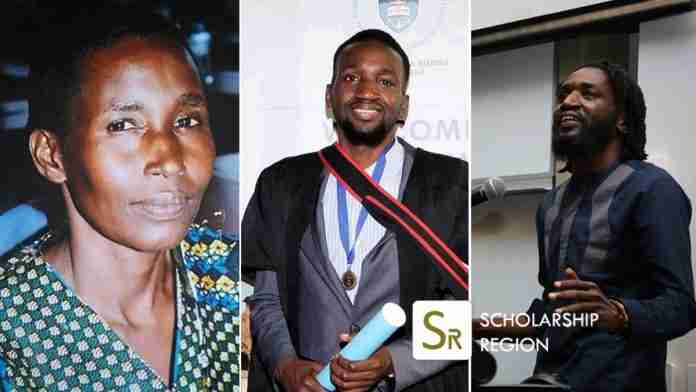 A brilliant man from Uganda, Moses Isiagi has dedicated all his three medical degrees to his mother who died of brain disease at a time he has not become a doctor.

Moses shared an emotional story of how his loving mother met an unexpected death in 2012 following challenging times she faced after an accident in 2010.

In Moses story, his very loving mother who was the backbone of their family had an accident on her way back from decorating their church for a wedding scheduled the next day. Unfortunately, his mom was hit by a hit and run car that left her for the dead.

Moses who received an emergency call quickly rushed to her rescue and took her to the hospital. According to him, she was slightly bruised but that was the beginning of her blindness, 7 months later she was completely blind.

“After running all the possible tests, her eyes were fine but she was blind. One year later, all eyesight was lost,” Moses narrated.

Shattered by the illness of their mother, who was the backbone of their family, Moses narrated that his father struggled to keep up with taking care of the family as he was struck with a loss of job resulting from a coup in Uganda.

“Dad was always upcountry, the Goverment 🇺🇬 He had served in previously had given him a Job, but the new Government coming in with a Coup meant new people came in. So he had lost his Job. This is a reality in many African nations that have had coups.

“He had to do odd Jobs to help sustain the family,” he narrated.

His mother after several operations had to go for brain surgery. He recalled that his father could not withstand being at the hospital as he was deeply pained.

Three days later after the surgery on the 7th April 2012, his mother became brain dead and had to pass on. The incident crashed his father especially knowing that he hadn’t been there for the last moments of her life.

Despite all the challenges his family encountered, Moses was proud to celebrate his Master’s Degree in Medicine from the University of Cape Town (UCT), South Africa, noting that he has made his mother proud.

Moses said he had siezed every opportunity he had to ensure he succeeds and that he may not have gone where he intended to, but for sure he have ended up where he needed to be.

“Mom I got three degrees after your death and I got the highest honor for a masters student in the best University in Africa, a Master of Science in Medicine with a Distinction,” Moses said.

“For this next decade after your death as I honor you , I shall carry on your legacy, I daily give my best to the PhD in medicine am pursuing in UCT and am grateful for the life lessons mom,” he concluded.