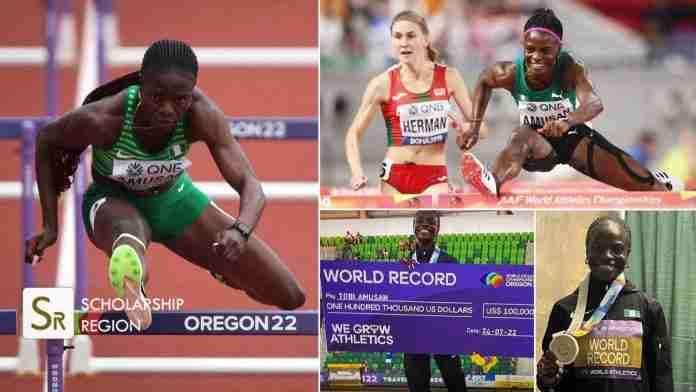 An exceptional Nigerian Athlete, Tobi Amusan has broken the women’s 100m hurdles world record at the World Athletics Championships 2022 which was held in Oregon, United States on Sunday, July 24, 2022.

The 25-year-old athlete beats American Keni Harrison‘s world record of 12.20s after finishing the 100m hurdle race in 12.12 seconds during the semi-finals. She went ahead to set a new outstanding record in Finals which she finished in just 12.06 seconds, making her the best in the world.

Amusan, who was fourth at the Tokyo Olympics and at the last worlds in 2019 took eight hundredths off American Keni Harrison‘s world record of 12.20 from 2016. It’s the largest time drop for a world record in the event in 42 years.

“At first I was like, where the wind reading at?” Amusan said (the wind was +.9 meters/second, well below the limit of two meters/second). “But then I wasn’t really bothered because the goal is to cross the line first.”

Amusan also became the first ever Nigerian to win a World Championship gold in history. In 2021, she became the first Nigerian to bag a Diamond League trophy when she set a sensational African Record and Personal Best of 12.42secs, Zurich, breaking Glory Alozie’s 23-year African record.

SR - July 25, 2022 0
The Commonwealth Secretariat has various opportunities available, including within health, youth, climate change, and international trade, among others.The Commonwealth is a voluntary association of...

SR - May 12, 2022 0
The 2022 Orange Knowledge Programme is now open for interested and qualified candidates willing to study in the Netherlands.The scholarship is a fully-funded award...
Load more

Speaking shortly after the World Record, Amusan gushed: “I wanted to get out and go. I did what I had to do. Now I’m looking forward to the finals,” said Amusan.

Amusan became a hurdler by chance, during her studies at Our Lady of Apostles Secondary School in Ogun State, South-West, Nigeria.

At age 13 or 14, she went to a meet intending to compete in the flat sprints and long jump. But by the time she arrived, the only event left was a hurdles race. She won that race, and the rest — especially Sunday night — is now history.

“I used to be on the soccer team, but I would be all over the place on the pitch. My coach suggested I go try out on the track team and I became the fastest girl on the team, and that’s how I got on the school relay team.” Amusan said.

She had to overcome doubts from officials in Nigerian athletics before picking up her first senior hurdles title at the African Games in Congo-Brazzaville in 2015.

“The typical Nigerian approach is to make you feel like you cannot make it. I wasn’t expected to medal at those Games. There were so many voices saying I couldn’t but I used that to show that I could – and that title changed my life,” she narrated to BBC.

Since she moved to attend the University of Texas, El Paso, United States, Amusan has not looked back and won several awards before breaking this world record.

In 2018, she won gold in the 100m hurdles at the Commonwealth Games in Australia.

Tobi Amusan was presented with her cheque of $100,000 after breaking the world record in the just concluded race. She also got another $70,000 for winning a Gold medal.