Exceptional Nigerian man wins award to study in Europe, travels out of his country for the first time in his life 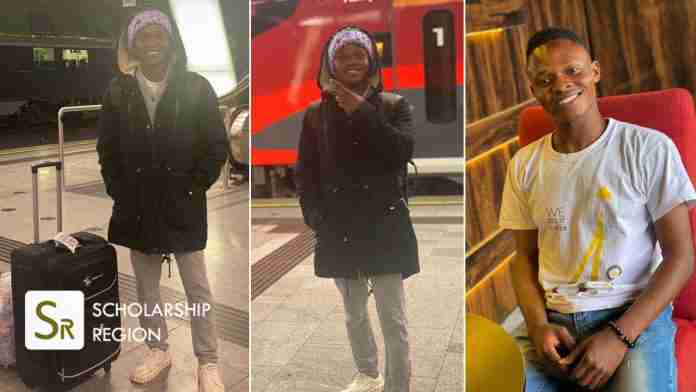 A young and determined Nigerian man named Samuel Fajana has won a Fully Funded internship award to the International Union of Forest Research Organizations (IUFRO) in Vienna, Austria despite not having a Bachelor’s degree.

Samuel who is currently a student of the Federal University of Technology, Akure, South-West Nigeria narrated that he has been unable to complete his Bachelor’s degree due to strike action by the university staff in Nigeria.

According to reports, university education in Nigeria has been shut down by the Academic staff since February 2022 due to the President Muhammadu Buhari led administration’s inability to fund the institutions.

Samuel who is a victim of the Educational shutdown in Nigeria stated that he has utilised the strike period to pursue an internship abroad. He explained that he had previously applied but got rejected severally until this moment.

“In August 2021, I applied for the IUFRO – IFSA Joint Task Force Deputy Coordinator position again but was told my experience will fit better into another position which I applied for but was rejected again. I moved on with the mindset that I will try again,” Samuel added.

Samuel stated that while the Academic Staff Union strike was ongoing, he saw the opportunity open again and decided to apply for it. “I saw the open call for this year and I said to myself “Sam, you’re better than you’re last year, this is your chance. Go for it!” he narrated.

Listing the awards that he had won during the strike, Samuel said he has won a $2,000 seed funding award. ” I won a seedfund of $2,000 from Paragon One in collaboration with National Geographic and The Nature Conservancy for my conservation project at Araromi Seaside.”

“I got an ambassadorship position with Paragon One which has been helping me to impact young people for global opportunities and I also earn dollars since February,” he added.

Samuel thanked God and everyone that contributed to him winning the award to Austria.

“As much as I am supposed to be a graduate by now but I didn’t allow the strike action to limit my dreams or stop me from progressing in my career. I am grateful to God for this big achievement and I also owe it to the angels in flesh that God has placed around me,” he said.