Few years after being suspended in a Nigerian University, Man bags First Class Degree and Masters in UK 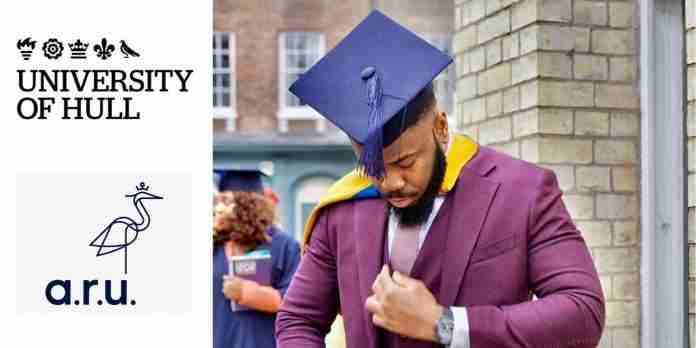 A Nigerian man, Noble Eyisi, who served as the Student Union Government (SUG) President at the Nnamdi Azikiwe University, Anambra, South East Nigeria has concluded his Masters Degree in the United Kingdom (UK) after being suspended from the Nigerian University.

Noble Eyisi was unable to conclude his University education in Nigeria due a suspension handed to him while he was the SUG President of Nnamdi Azikiwe University in the year 2015.

He however rose above his challenges by pursuing a Law Degree at the University of Hull, UK, bagging a First Class Honors in the year 2019. Noble built on his First Class Degree to push forward for a Masters Degree.

Sharing how he was able to scale through all the challenges, that saw him become a Masters Degree holder in International Commercial Law in the year 2021, Noble explained that he solved many challenges simultaneously while he studies for his Masters Degree, including having to do three jobs while attending lectures and studying.

He said (via Linkedin): “It’s not coincidence and it’s not luck. I know it comes from above. I’ve got miracles, a million little miracles.

“This one feels different for so many reasons, one of which was becoming a dad to Chimdaalu, having to do three jobs while attending my lectures and studying and being a husband to my beautiful wife. But finally, thank God it ended with praise.

“I just want to say a huge thank you to everyone who made this possible, from my family to my mentors. I appreciate you all a lot.”

Noble Eyisi finally expressed a strong interest in pursuing a PhD seeking support from Nigerians and well wishers from all over the world.