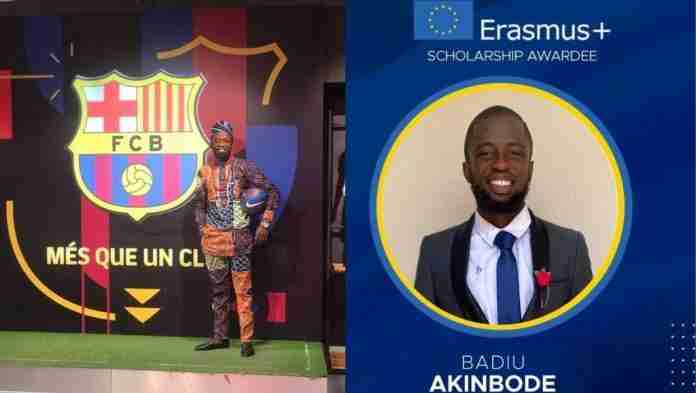 A young Nigerian, Badiu Akinbode has taken his time to narrate his scholarship journey after winning the Popular Erasmus Mundus scholarship.

The story of Badiu Akinbode was quite inspiring as he confessed to having applied for 23 Scholarship programs between 2019 and 2021 and only the Erasmus Scholarship was successful.

In his write-up titled “Behind the Scene; The Village boy in Barcelona” he described himself as being strategic.  Starting his journey in 2017, he didn’t apply for any scholarship until 2019 which gives him ample time to build his profile.

“Behind the Scene; The Village boy in Barcelona. I am a boy next door with more than half my existence spent in my Village: Igboora, one of the seven towns in Ibarapa which is reputed to being the town with the highest twin-rate in the World.

I once described self as a poor village boy, that should still be valid. The Journey to winning an International scholarship via the “Erasmus Mundus Scholarship” did not happen overnight. I recalled in my final year (2017), fresh from returning from an Industrial training where I had received my tutelage from OK foods Nigeria limited, a leading FMCG in Nigeria.

“I was basically doing the same thing every other day and thought to self, this was boring, why can’t I explore Academics, that was when I began to nurture the idea of going into Academics someday, however, to achieve this, I told myself I had preferred to be an Academic in the frame of my then Mentor, Prof Pius Adesanmi, I dreamt being a Canadian Academic as if my life depends on it. To achieve this, I knew I am in dire need of a Scholarship overseas, armed with a Second class honor (Upper division) degree.

I felt sobered and almost regretted for the first time why I had not put all my energy on getting a first class degree which would have increase my chance of an International scholarship.

Luckily enough, I am a Futarian, I must say this, being a Futarian gives you an extra edge ahead of your peers in getting an International scholarship, almost half of my lecturers were Scholars in Europe or America at a point during their studies, that’s no gain saying, in June of 2017, my friend, Samuel Ayanleye told me there’s a training on Facebook by a group of FUTA alumni known as “The shoulders giant” It was founded by a FUTA alumnus who will later become my mentor and guardian: Dr Milton Babajide Macaulay , I remembered the first session was anchored by Femi Ogunlalu, now a Doctoral student in the United State of America’s and the guest speaker was Dr Emmanuel Jesuyon Dansu who was then a graduate Student in Japan.

It was that day that I renewed my hope that it was indeed possible to win a Scholarship via a second class honor like the one I was poised to graduate with after their lengthy training, albeit, I will need to work twice harder unlike my contemporaries who had a first class degree.

It is good to say the journey began in 2017, however, I did not apply for any scholarship until 2019, I used the first two years of my scholarship drive towards building my profile, I was very intentional about this, with the help of my then Head of Department while I was a National Diploma student at The Polytechnic Ibadan, Saki campus; Mr Kazeem Jimoh, I was able to serve my fatherland at my Alma mata as an Assistant lecturer, a beautiful addition to my CV.

I taught the students with passion, lectured about four or five courses inclusive of Higher National Diploma Students, I gained valuable research skills such as writing a Manuscript towards publishing in reputable journals amongst many others, I did this for more than a year, I was unconvinced of my profile, I still do not have the believe that it was rich enough to be noticed by any selection committee of an International scholarship.

I therefore enrolled for a Master’s degree in my Alma mata with the determination this time to graduate with a Distinction, while in the process, I will ensure to publish as much as I can, towards the end of the year 2019, I had in my arsenal already two publications in peer reviewed International journals of repute and so many other qualities I was convinced the selection committee cannot but agree that this is a suitable candidate. 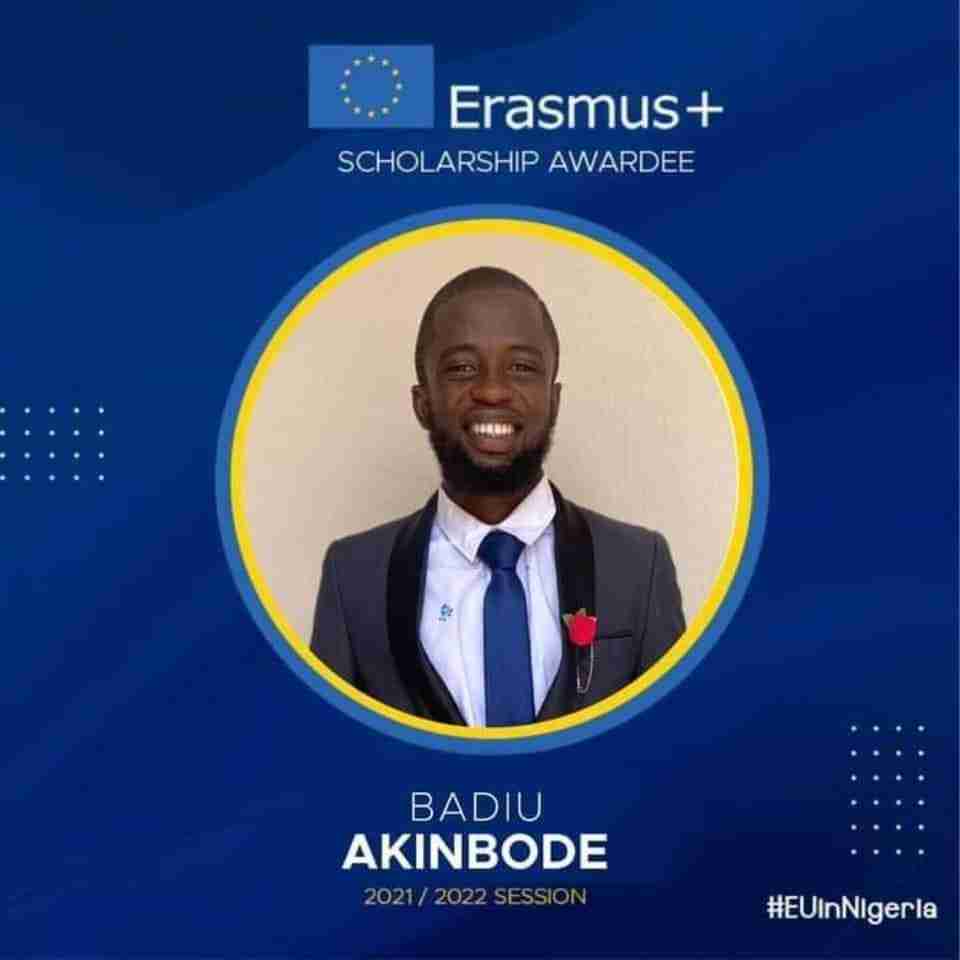 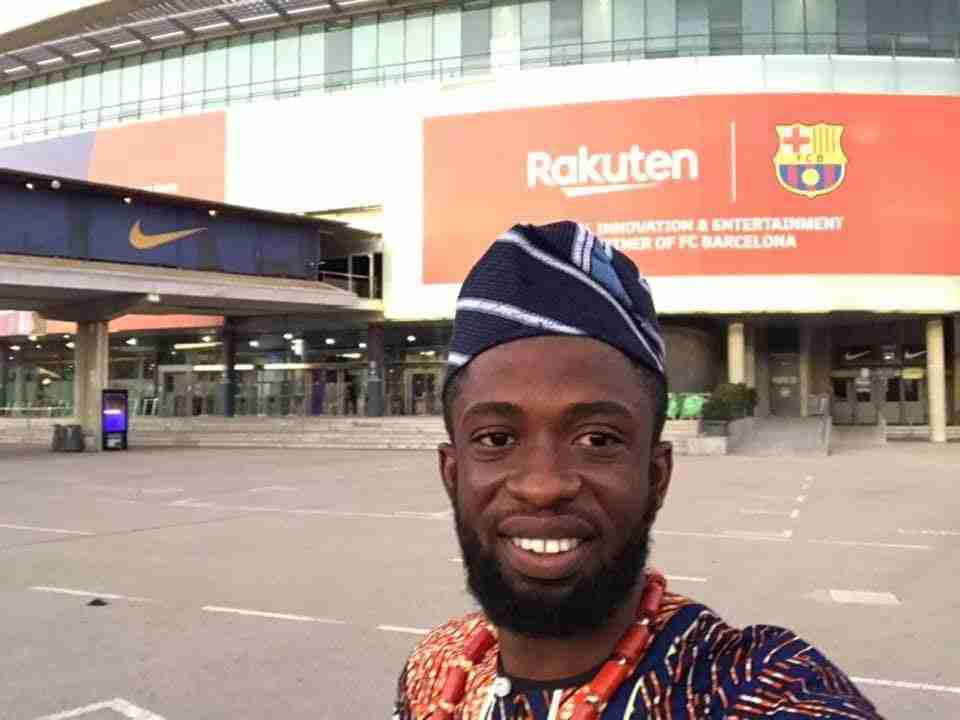 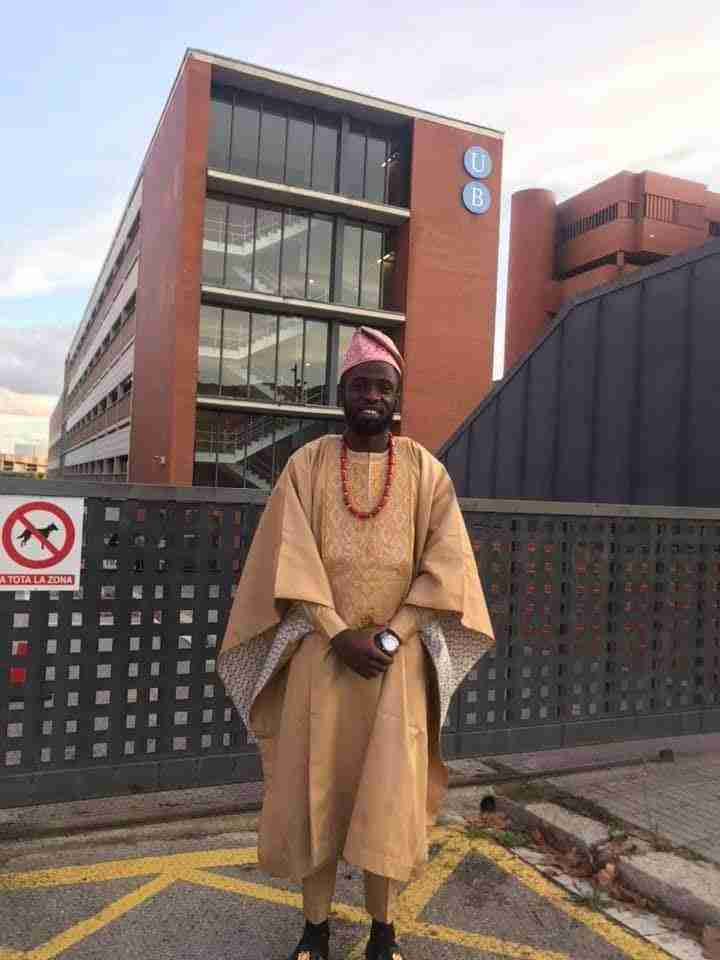 Suffice to know that my writing skill is not to be discarded with a backhand, my leadership/volunteering experiences were so much that I cannot include all of them in my CV, I had attended so many related conferences/seminars/lectures too numerous to mention, thus, the first two years was committed to building my research/teaching experience while undergoing a Master’s degree in view, by the end of 2019.

I had applied to about 10 scholarships in total and got rejected in all by mid of 2020, with encouragement from my friends, most especially from Samuel Ayanleye who’s now a Doctoral student at Mississippi state University after the completion of his Master’s program with Distinction at the University of British Columbia, and a host of other friends mostly from “Potential Scholars WhatsApp group” created by my friend and brother: Ademola Emmanuel Aiyenuro who is now a Master candidate at Cambridge University, but I digress, I knew I was not intentionally ignored, there are just better candidates than myself.

I was however optimistic that by the time I am done with my MSc which I had worked, prayed and read tirelessly to ensure that I had graduated with Distinction, it would have increased my chances, then the ASUU strike dawned on Nigeria students, I was knocked hard, that will mean I would not have graduated with a Distinction by the time another application year starts in September/October, luckily enough, I have worked with other Researchers and Mentors in my field of study since 2018 and sent manuscripts in their numbers too, as at the time I sent my last application in March of 2021.

I had about 10 publications in International journals of repute, an MSc degree in view, recall that I have never be found wanting of other sterling qualities that I have been told were key ingredients in winning a Scholarship, by the time the news crept in that I had indeed got a “YES” to study for a Master in Quality and Analytical Laboratory from the University of Barcelona, ranked number 1 in Spain, 24th in Europe and 87th in the World by the Center for World University Rankings, I had applied for 24 Scholarship across the world between 2019-2021 with only a single “YES”.

In between the YES, I must acknowledged being depressed especially in August 2020 after getting a rejection from Mandela Rhodes Foundation Scholarship at the last stage, I never resolved to quitting for once even though there are periods I gave myself a well deserved break away from pursuing Scholarship, however, you cannot have the kind of friends, mentors and guardians that I have and give up, that is almost an impossibility, for fear of omission, I will not mention names, most are FUTA Alumni while others are guardians with base in Europe & America.

Lest I forget, It is common knowledge amongst Intending scholars from Nigeria who are always reluctant to write standardized test like GRE/TOEFL/IELTS, in lieu of this, prior to applying for ERASMUS MUNDUS Scholarship that got me my “YES” I had enrolled for an IELTS tutorial courtesy of Erudite Millenium founded by Saheed Oladele in December of 2020, in two weeks, I was groomed for the examination which I passed with no hitch, I therefore decided to apply for programs where IELTS/TOEFL is mandatory knowing quite alright that the competition therein will perhaps be lesser, I was not wrong, 3 out of every 10 intending scholars have a Standardized English Test in their arsenal, the rest relied on the Certificate of English proficiency from their University, which is not a bad idea after all, it must have been my drive for a difference that made me enrolled and wrote IELTS.

Beautifully enough, by Allah, I won the highly prestigious Erasmus Mundus Scholarship before completing my Master’s degree in FUTA which unsurprisingly came with a Distinction grade, 9 international peer reviewed publications, a publication in a NIFST conference proceeding, and 3 other publications under review. Alihamdulilahi!

I am thankful for the outpour of goodwill messages from my friends, Mentors, Mentees, Fathers and Mothers alike, E seun, modupe lopolopo Sir/Ma, It is my prayer that good things shall never cease in our households too. I look forward to this journey with much enthusiasm. NB: Attached pictures of my rejections between 2019-2021, first day of lecture at the University of Barcelona,visit to Camp Nou which is just two minutes walk from my faculty and pixels nicked during the orientation for the 134 Erasmus Mundus Scholars from Nigeria.”

Visit HERE to check out many more Scholarship opportunities