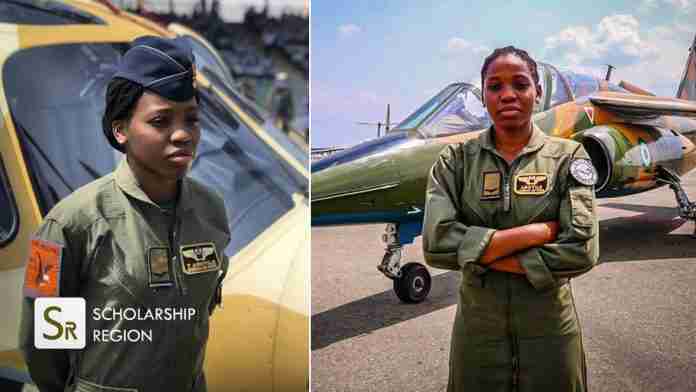 Tolulope Arotile (late) during her lifetime broke a lot of individual records, the most notable of them being the first-ever female pilot in Nigeria to fly a combat helicopter.

Tolulope had always wanted to become a pilot right from her tender age and was strong enough to keep her dreams alive until it was achieved. Born in 1995, Tolulope emerged Nigeria’s first ever female combat helicopter pilot in 2019, breaking the Nigerian Air Force 55-year-old record.

“One day — when she was very small — she pointed to one small aircraft parked on a field and said, ‘Dad, one day I am going to fly that aircraft,’ and I said amen,” her father, Akintunde Arotile was quoted to have said.

She graduated outstandingly with a Bachelor’s Degree in Mathematics from Nigeria’s Military university – the Nigerian Defence Academy, Nigeria and thereafter enrolled for flying training in South Africa.

After the completion of her education in South Africa, she returned to Nigeria to serve her fatherland through the Air Force.

“I joined the military simply out of passion for it. Being a military personnel has been a long term ambition for me. The carriage and what they stand for is simply exceptional” she said in an interview shared by the Nigerian Air Force.

Studying in universities and institutions abroad opens you to a lot of opportunities worldwide. At Scholarship Region, we keep track of Scholarship opportunities around the world to inform and remind you whenever it is available.

Tolulope’s military prowess was however halted on the 14th of July, 2020 after she died from head injuries sustained after being hit by a car in Nigeria’s Air Force Base, Kaduna, North-West, Nigeria.

“Her memory will be indelible, and her efforts remembered,” President Muhammadu Buhari of Nigeria said in his condolence message to the families of the young scholar.