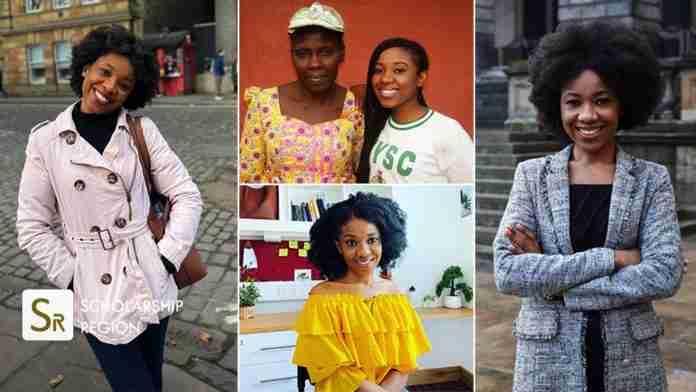 A young Nigerian Lady, Solace Ojotule, whose mother was abandoned by their family after the death of her father has overcome the tough struggles she faced after bagging a Mastercard Scholarship to study in the United Kingdom.

Solace Ojutule who narrated her story on Linkedin recalled that her father died when she was at the age of 4 years and immediately after his death, the paternal family seized all her father’s properties because her mother bared no male child.

According to Ojotule’s narration, her mother bared 5 children including herself and all of them are females. “The girls were abandoned with their mother after all properties have been seized by paternal relations. Then the real struggle began for us as kids and for our mother who was now both the father and mother. All hopes went down the drain and it looked like there was no future for me. Life ended before it began in the real sense,” she wrote.

Her mother struggled to pay for their school fees throughout her primary school education. After her primary education, she recalled that she was unable to proceed to High School due to funding and would hawk when her colleagues are going to school.

“In 2006, I graduated from primary school and stayed at home for weeks while my mates proceeded to secondary school. My mother couldn’t afford secondary school registration fee. I would hawk caustic Soda early in the morning while seeing my mates in school uniform going to school. My mates would see me and ask why I wasn’t in school,” she said.

Ojotule stated that she got lucky when the government in her state provided free education for junior high school students. She got enrolled in high school and was able to graduate.

She furthered her education at the Kogi State University, North-Central, Nigeria where she studied Theater Arts and throughout her study at the university, she narrated that she would return from campus to hawk just to gather funds for the next tuition fee.

After bagging a Bachelor’s Degree in Theater Arts, Solace Ojotule applied for scholarships and after many rejections, the Mastercard Scholarship granted her an award to study at the University of Edinburgh, United Kingdom.

Ojotule was awarded a scholarship award for Masters Degree in Africa and International Development. She is set to complete her Master’s at the University of Edinburgh in 2022 and finally achieve her dream.

“I arrived in the UK and I still can’t believe it’s this ‘ordinary’ girl. Me that can’t even sponsor a trip to Niger Republic. It is still like a dream.. The way I’m feeling now is such that I can’t explain… I’m happy to prove that GIRLS can do it. Our dreams are valid,” she said in 2021.

Ojotule thanked her mother for staying strong to ensure that her children all become successful despite the discrimination they faced. “And to see my mother smile after all those struggles, I’m perplexed. This is all I have ever wanted. To see my mama smiling and to prove that female children have no boundaries. We are able,” she said.