Nigerian man who hawked at 5 years old to pay for school becomes successful, graduates from US university with 96% grade 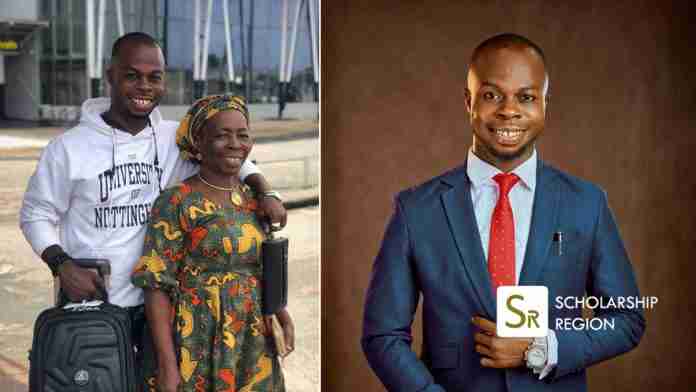 A brilliant Nigerian Man named Ifeanyi Akaleme, who hawked for his mother at the age of 5 to pay his school fees has grown to become successful despite the rough start.

Ifeanyi who now has an outstanding Master’s Degree in Business Administration from Nexford University, Washington, United States. He graduated with Distinction having 3.85 out of the possible 4.00 grade points.

He narrated that during his schooling in Nigeria, he would return home to pick up his tray to sell whatever goods his mother had. His start-up as a seller granted him the opportunity to become familiar with how trading works.

“From my early years of my selling, I learned that building good relationships is one of man‘s biggest chances of survival. I was so good to people that a lot of big men who I met in the market wanted me to serve them,” he narrated.

Sharing a picture of himself and his mother in the United States, Ifeanyi noted that he is proud of his mother’s tenacity throughout his young age.

Studying in the United States opens you to a lot of opportunities. At Scholarship Region, we keep track of Scholarship opportunities around the world to inform and remind you whenever its available.

“Yesterday, I realized I wasn’t the only one who sold at an early age. The investment juggernaut, WARREN BUFFET started selling at 7. I could still count the advantages of having this top-notch early experience,” he said.

Ifeanyi Akaleme has now established himself and founded a company called Project Nations where he hopes to connect businesses all over the world together.