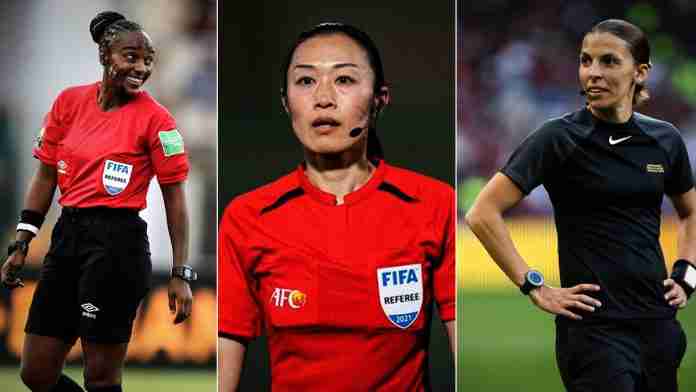 Three exceptional Female referees of football have broken a 92-year-old record of the World Cup after being selected as among the 36 referees that will officiate the ongoing 2022 World Cup in Qatar.

The three women by name; Stephanie Frappart from France (Europe), Salima Mukansanga from Rwanda (Africa), and Yoshimi Yamashita from Japan (Asia) are all scholarly referees in the women’s world football.

Their achievements in the world of football accorded them the benefits of not only breaking the Men’s World Cup 92-year old record but also setting a new record for women around the world to look up to.

Salima Mukansanga of Rwanda in 2022, became the first woman to referee a Men’s match at the Africa Cup on Nations (AFCON). Yoshimi Yamashita on her end, was the first woman referee to take charge of an AFC Champions League. According to several reviews, they all performed wonderfully well as officials.

Academically, Salima Mukansanga of Rwanda is a certified Nurse, holding a Bachelor’s Degree in Nursing. Others have various degrees and certifications that contributed immensely to achieving such great feats in world football.

At Scholarship Region, we keep track of Scholarship opportunities around the world that can help you to also make great impacts.

Several educational scholarship opportunities are ongoing in Europe, USA, UK, and Canada to explore. Here are some ongoing scholarships you should check out;

Apart from Stephaine Frappart, Salima Mukansanga and Yoshimi Yamashita who were selected as Referees, three other women including Neuza Back (Brazil), Kathryn Nesbitt (USA) and Karen Diaz Medina (Mexico) were also selected as assistant referees for the tournament.