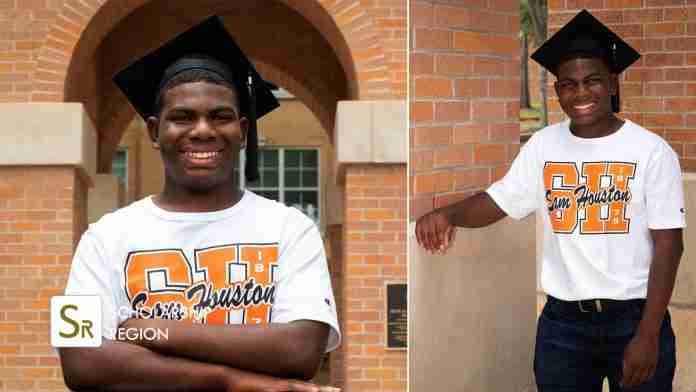 A brilliant 15-year-old boy, Nehemiah Juniel has set an outstanding academic record after becoming the youngest ever person to graduate from the Sam Houston State University (SHSU), Texas, United States.

Nehemiah Juniel who is set to receive his Bachelor’s degree in August 2022 has always been highly interested in learning. At age 5, he started solving pre-algebra and received his Associate of Science degree at age 13.

Now at 15 years, he will graduate from Sam Houston State University, Texas, United States with a bachelor’s degree in health sciences and become the youngest student to ever graduate from the university.

“Words can’t express how proud we are of him,” his father — Raphael Junie — said, according to the outlet.

Speaking about Nehemiah Juniel’s outstanding academic record, Corie Juniel, his mother narrated that he had started reading and writing at two. She believes Sam Houston State University (SHSU) was a great fit because the extra services provided made his transition into university life easier than expected.

“Financial aid spent hours with us to get Nehemiah’s award package worked out. They went the extra mile when speaking with the Federal Student Aid office, and were the most patient, resilient staff we’ve ever had the pleasure of working with,” she said.

While learning comes naturally for the 15-year-old, earning a college degree and maintaining a high GPA still came with a few difficulties.

“The biggest challenge was staying focused. It was especially difficult when the course material was uninteresting or something I already knew,” Juniel said.

“I often needed encouragement from others to put effort into such work before I put myself back on track again. My professors and teaching assistants were the most positive aspect of my experience at SHSU,” he added.

Juniel stated that he planned to become a Surgeon but as he grew older, he decided to study Cardiology. “Around the age of eight years old, I decided I wanted to become a surgeon of some sort,” he said. “As I grew, I continued to change and specify what kind of career I wanted to pursue. This culminated into my decision to study cardiology.”

He also hopes to inspire others to go after their dreams, as well, no matter their age.

“Don’t get discouraged if you run into a few issues or if you fail a couple of times. As long as you keep trying, you will eventually reach your goal,” he said.