Young African man bags bachelor’s degree from US university after working as a cleaner to sponsor his education, makes family proud 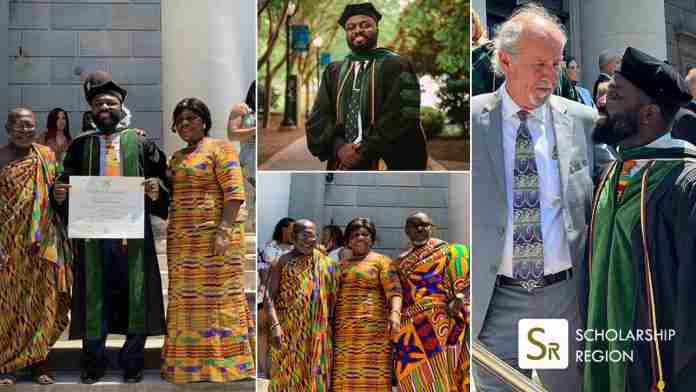 An exceptional Ghanian man who immigrated to the United States of America (USA) to work as a cleaner and janitor for several years has finally become a medical doctor.

The man is known as Kwadwo A. Sarpong graduated from the Georgetown University School of Medicine in Washington DC United States of America.

Narrating his story, he said his academic success at Georgetown University School of Medicine has made him the first medical doctor in his family as his father and mother ended their education in middle school.

“My parents edu ended in middle sch but they sacrificed everything to get me to this point! Father worked multiple menial jobs, while my mom did housekeeping. She’s 70 & still a Janitor,” he wrote on twitter.

His entire family including his father and mother graced his graduation event with smiles on their faces as their son becomes the first-ever doctor in their family.

Speaking about his beginning, he said he migrated to the USA in 2010 and worked as a cleaner in a hospital, cleaning rooms and making beds when he began to consider a career in medicine.

Kwadwo “Kojo” Sarpong narrated further that several people looked down on him while he was struggling as his job led others to make assumptions about him.

Eventually, Sarpong began to ask the hospital’s physicians about their jobs. Ultimately, a thoracic surgeon asked Sarpong about his educational goals and invited him to observe the medical staff at work.

Twelve years later, Sarpong has co-founded two nonprofit organizations, has been invited to the White House several times, and this past weekend graduated with an MD from Georgetown University School of Medicine in Washington, DC.

Saprong says he hopes that sharing his story will inspire other underrepresented students to believe that they, too, can become physicians.

He also enjoys receiving messages through social media from people who have read about him. “They’re like, ‘Wow, I thought I would not be able to do this. But you inspired me that I should just keep pushing on’,” he said.