Young African Mathematician bags Bachelor’s degree at 17 years old, set to earn PhD in the US 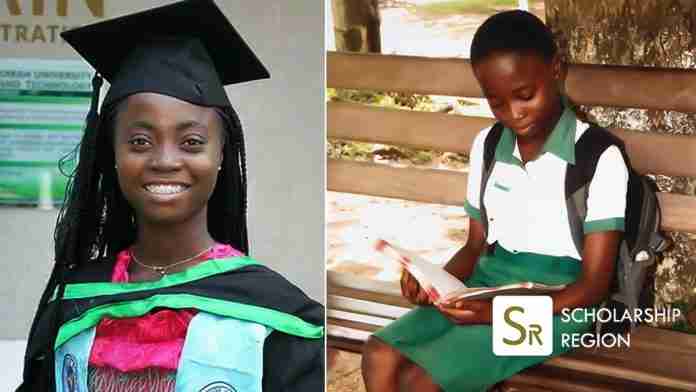 An exceptional mathematics genius, Ruth Ama Gyan-Darkwa who hails from Ghana has set the record of being the youngest Bachelor’s degree holder in the country after graduating at the age of 17.

Ruth Ama Gyan-Darkwa who was born in 2004 started her university education at the age of 13. The young and determined math genius enrolled for a Bachelor’s degree in Mathematics at the Kwame Nkrumah University of Science and Technology (KNUST) in Ghana.

Mathematics is considered one of the most difficult courses in the world and despite the technicalities surrounding mathematics, Ruth Ama Gyan-Darkwa earned Second-Class honours.

The Head of Department of Mathematics of the College of Sciences at the University, Professor Abeiku Akora-Prah described Ruth Ama Gyan-Darkwa’s success as exceptional noting that the course was truly tough and that she possess a strong brain to have scaled through.

Speaking on Ruth Ama Gyan-Darkwa’s record the university public relations officer stated that Ruth has become the youngest ever student to graduate from the University and that it is a major boost for the Science, Technology, Engineering and Mathematics (STEM) initiative as well as the institutional policy to increase the male-female ratio.

Ruth Ama’s Father, Kwadwo Gyan-Darkwa revealed that his daughter has the assurance of admission to a United States university to pursue her Master’s and PhD degrees.

Ruth Ama expressed that she is happy to serve as a role model for young generations across the world.

“At first, I heard girls should be in the kitchen, whereas boys should be going to class. As far as I know of some women who have made it; so now, I will be like a motivation to the young ones that they should look up to me to see how far God has brought me in terms of my Academics,” she said.

At the young age of 18, Ruth Ama has now been admitted to study for a PhD degree in Electrical Engineering at the University of New Mexico in the United States. A report by her alma mater, KNUST, confirmed that she is aiming to join the National Aeronautics and Space Administration (NASA).

“She (Ruth Ama Gyan-Darkwa) is 18 years old and a Ph.D. student at the University of New Mexico, Department of Electrical and Computer engineering aiming to work at NASA,” the report explained.