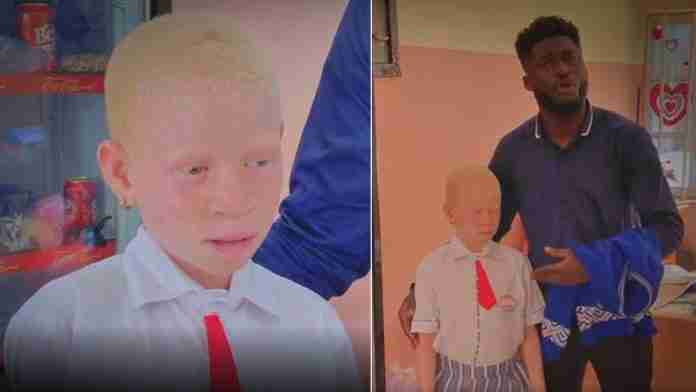 A generous and exceptional Nigerian man named Moses Anayochukwu Usulor, has taken a huge step to ensure a young albino girl whose parent had denied her access to education for four (4) years gets the education she deserved.

The young albino girl by name, Deborah, was denied access to education due to her albinism and was considered never to amount to anything by her parent.

According to Clevelandclinic, albinism is not a disease and is contagious. It is just a rare genetic disorder that makes child being born with the usual amount of melanin pigment, the chemical that determines the color of your skin, hair, and eyes.

Deborah’s parent however thought Albinism amounts to lack of intelligence and decided to engage her in only menial home tasks such as fetching firewood during school hours.

According to reports, Deborah lost 4 years until the intervention of Moses Anayochukwu Usolor, who gave her a full scholarship, paid all her school fees and promised to ensure she gets the education she deserved.

At Scholarship Region, we keep track of Scholarship opportunities around the world to inform and remind you whenever it’s available.