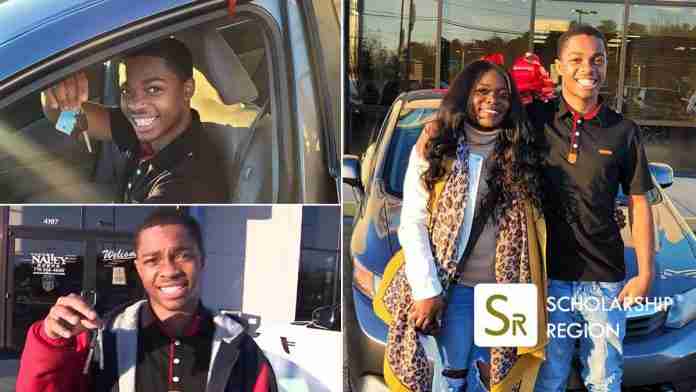 A young high school boy named Jayden Sutton received a generous gift from a kind woman who observed that he treks 7 miles (11km) from a restaurant where he works every day to school in order to sponsor his education.

Jayden Sutton from Georgia, United States is a high school senior from Cobb County. As a result of the financial struggles faced by his parent, the hardworking young boy opted to work at a restaurant to earn money to sponsor his education.

He often had to trek from his school down to the restaurant where he works and then back home every day. Sutton told the outlet he would get out of school at 3:30 p.m., then walk miles to his job at the restaurant. After his shift, which usually lasted between six and eight hours, the teen made his way home, sometimes not arriving back until almost midnight.

The 18-year-old however got blessed after his encounter with a generous woman named Lavonda Wright Myers. According to her, she drove passed Jayden Sutton trekking in a light rain and decided to give him a ride.

“On, Dec 10, I passed a 12th grade stranger walking in a light rain at the speed of lightning headed to work after school. After working a 7hr shift, He would walk miles back in the cold arriving home around 1130pm at night with this same smile,” she narrated in a Facebook post.

She promised Jayden Sutton on that same day that the next time they meet, she will have gotten him a car. “I told him in BOLD FAITH the next time you see me it’ll be with a car the lord’s going to bless you with. We prayed together on the steps of his job and activated our faith,” she stated.

Lavonda Wright Myers narrated further that she raised a Gofundme account and was able to receive $7,000. Wright was eventually able to buy a car for Sutton adding that the general manager of the Nalley Honda dealership in Union City dropped the price of the vehicle after hearing Sutton’s story.

“I just want to say thank you. A million times. You don’t understand how much,” Jayden Sutton told Wright after he was gifted the car, according to WAGA.

With his new car now ready to help him, Jayden Sutton advised everyone who is currently working hard to keep doing so to accomplish their dream or goal. “If you’re doing something good or trying to reach a goal, keep doing it. You might get some help. That’s what happened to me,” he said.