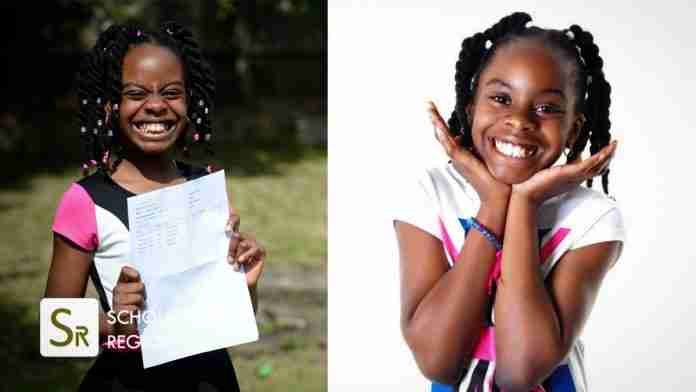 A young British-Nigerian math genius named Esther Okade has earned a Bachelor’s degree in Financial Mathematics from the UK open university at the age of 13 after an outstanding performance.

Esther Okade who is a math genius from childhood was said to have started solving high-level mathematics including quadratic equations when she was three (3) years old. According to her mother, Omonefe Okade, Esther had wanted to enrol at university at the age of 7.

When Esther was 6 years old, she was awarded a grade C in GCSE maths and ultimately qualify to sit A-Level maths exams. At the time, the University of Cambridge in the United Kingdom invited her to study Mathematics at the institution.

However, Esther’s parents had her homeschooled and in 2015, when Esther is 10 years old, she got enrolled at Open University (a UK-based distance learning college) for a university maths course, making her the youngest undergraduate student in the UK.

A few weeks after the young Esther got enrolled at university, she got straight A’s and ultimately became the best student in her class. She described her first test as “easy” after scoring a perfect 100% grade.

“It’s so interesting. It has the type of maths I love. It’s real maths — theories, complex numbers, all that type of stuff, it was super easy. My mum taught me in a nice way.” she told CNN.

“I want to (finish the course) in two years. Then I’m going to do my PhD in financial maths when I’m 13. I want to have my own bank by the time I’m 15 because I like numbers and I like people and banking is a great way to help people,” she added.

The 16-year-old Mathematics genius is well on her way to achieving all her dreams at such a young age having reached an outstanding top in academics. She has authored a series of math workbooks for children such as Yummy Yummy Algebra and together with her mother, Omonefe, who is also a mathematician, they have developed a curriculum for a proposed preschool in the country’s Delta area.

Esther is determined to give back to society through an educational institution they established known as “Shakespeare’s Academy”. The academy will teach morality and ethics, public speaking, entrepreneurship, and etiquette, as well as the basics of reading, writing, math, and science.