Young Lady earns PhD at 25 years old, joins the 3.1% of black women in US with Doctoral degree 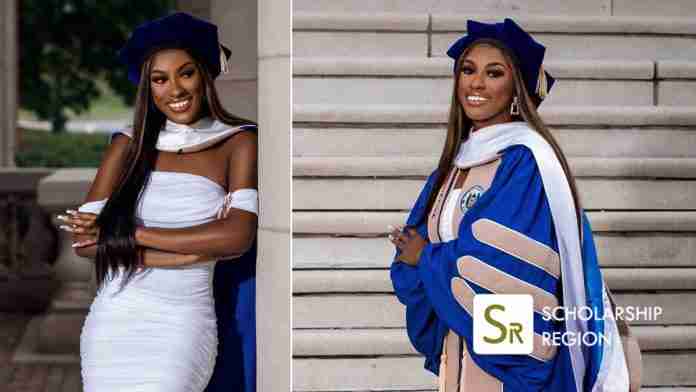 An exceptional Lady named Alesha Hammond has earned her Doctorate Degree (PhD) at the young age of 25 from the University of Lynchburg in the United States.

Alesha Hammond became a Doctor of Health Administration – Healthcare Leadership from the University of Lynchburg, Virginia at 25 years old after having an incredible academic run during her Bachelor’s degree and Masters.

She earned a Bachelor of Science degree in Public Health at East Carolina University, United States and thereafter proceeded to West Coast University in Irvine, California, United States. Celebrating her exceptional achievement, Alesha thanked God for allowing her to live up to her childhood dream.

“Only 3.1% of black women in the US earn doctoral degrees and tomorrow morning I will officially be one of them Officially as Dr Hammond,” she wrote on Facebook.

Studying in the United States opens you to a lot of opportunities and connections with world leaders. At Scholarship Region, we keep track of Scholarship opportunities around the world that can sponsor your education abroad so as to inform and remind you whenever they are available.

Alesha Hammond added that she achieved the exceptional feat of attaining a PhD at 25 years old. “At 25, I am officially Dr. Alesha Hammond,” she captioned an image of her graduation ceremony on LinkedIn.

“Thank you God for allowing me to live up to my childhood dream! It’s only up from here,” she added.

In another exceptional story, a young African man named Abdulzeid Yen Anafo earned his PhD in Mathematics at the young age of 25 years old. He set a record at the University of Mines and Technology, Tarkwa, Ghana after achieving the feat.