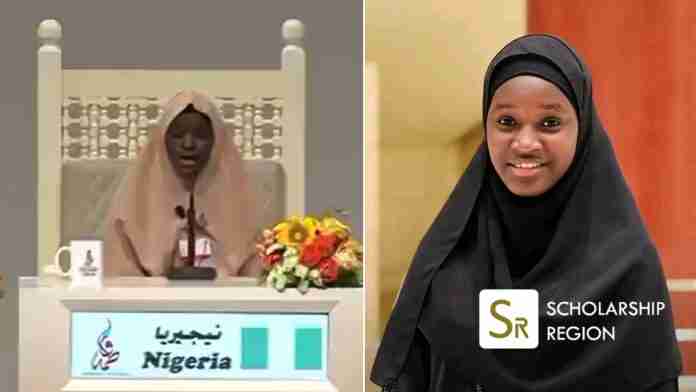 An exceptional young Nigerian girl named Aisha Abubakar Hussain has emerged as one of the best Quran memorisers in the world after winning the annual Dubai Quran memorization competition.

Aisha Abubakar Hussain emerged second, beating contestants from 48 other countries. She hailed from Kano State, Nothern Nigeria and was recorded to have displayed an extraordinary recitation that amazed the judges.

The Dubai Quran memorization competition which was hosted by the Dubai Culture and Science Society was attended by 50 countries. Aindati Sisi of Senegal emerged first with Aisha Abubakar Hussain of Nigeria and Shima Anfal Tabani of Algeria emerging second and third respectively.

According to the organizers, the first got a reward of 350,000 Dirhams while the second and third got 200,000 Dirhams and 150,000 Dirhams respectively. Other competitors also received handsome rewards.

In another story, an exceptional Nigerian mathematician named Faith Odunsi has beaten contestants from all over the world to emerge as the Global Champion in Mathematics.

Faith Odunsi who represented Nigeria in the Global Open Mathematics Tournament dominated countries including the United States, United Kingdom, China and more throughout the stages of the competition.

She was popularly known for solving 19 mathematical questions at a record time of 60 seconds, a feat that marvelled the entire world present at the occasion. “It makes me happy and honoured,” Faith spoke about her win.

Faith is in her final class at the Ota State Ambassador School, South-West, Nigeria. She had emerged the best Mathematics student in Nigeria before proceeding to represent the country at the global stage.

Faith explained that some stages of the competition were tough as she was just getting used to the system. She said; “I think the first was the toughest, there was a computer-based test and we had to answer many questions in one hour. My score in the test was 66.

“The second stage took the same format and I also scored 66. The quarter and semi-finals were on Microsoft themes. We were asked questions and we put in our answers; the first to put in the correct answers got 10 points,” she added. Read more about Faith Odunsi HERE.